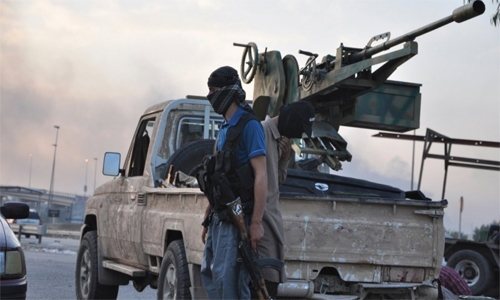 In a ministerial-level briefing today, the members of the Security Council discussed the findings of the thirteenth report of the Secretary-General on the threat posed by Daesh to international peace and security and the range of United Nations efforts in support of Member States countering the threat.

The members of the Security Council noted with deep concern that Daesh and other terrorist groups continue to exploit, both online and offline, the disruption, grievances and development setbacks linked to the Covid-19 pandemic, as reflected in the thirteenth report of the Secretary-General on the threat posed by Daesh to international peace and security.

The members of the Security Council reiterated that they condemn in the strongest terms all instances of terrorism, including the recent cowardly terrorist attacks, such as the terrorist attack in Baghdad on July 19, 2021, and noted with concern that Daesh could regain the ability to launch or orchestrate international terrorist attacks.

The members of the Security Council expressed concern over the alarming expansion of Daesh in many regions, including in Africa, and acknowledged that the growing influence of Daesh in Africa may have far-reaching implications for the peace, security and stability of the region.

They recalled that the Council’s presidential statement issued on March 11, 2020, underscored the need for a coherent and effective regional approach and stressed the importance of an urgent global response to support African countries and regional organisations.

The members of the Security Council deplored the continuous attacks on civilians, towns and military camps by Daesh’s regional affiliates such as Daesh in West Africa Province (ISWAP), in Greater Sahara (ISGS), and in Central Africa, and expressed concern over the presence of and threat from Daesh-Khorasan.

The Security Council underscores the importance of a holistic approach to countering terrorism and violent extremism conducive to terrorism, conducted in accordance with applicable international law, as well as efforts to address the governance, security, human rights, humanitarian, development and socioeconomic dimensions of the challenge, including employment for youth and the eradication of poverty.

The members of the Security Council expressed concern over the increasing use by Da’esh and its financiers of information and communication technologies (ICT), including emerging technologies, such as virtual assets and other anonymous means of monetary or financial transactions, and underscored the importance of international cooperation, effective governance in line with international law and innovative partnerships with the private sector and civil society to prevent and counter the use of ICT for terrorist purposes.

The members of the Security Council urged all Member States to fulfil their obligations, as set forth in the Council’s resolutions 1373 (2001), 2178 (2014), and 2462 (2019) to criminalize the financing of terrorism, as well as to further build the capacity of their financial oversight and regulatory systems in order to deny Da’esh and its financiers the space to exploit and raise funds, including by cooperating with the private sector through public-private partnerships with financial institutions and designated non-financial businesses and professions, and by taking into account the assessments thereof by relevant entities such as the Counter-Terrorism Committee Executive Directorate.

The members of the Security Council, on the eve of the fourth commemoration of the International Day of Remembrance of and Tribute to the Victims of Terrorism on August 21, 2021, reiterated their unwavering commitment to strengthening international cooperation to prevent and combat terrorism in all its forms and manifestations and reaffirmed that terrorism in all its forms and manifestations constitutes one of the most serious threats to international peace and security and that all acts of terrorism are criminal and unjustifiable, regardless of their motivation, wherever, whenever and by whomsoever committed.