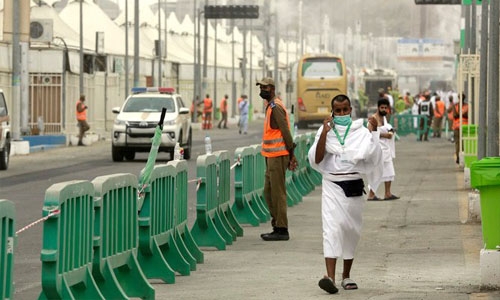 Pilgrims are spending the first day of Hajj worshipping and resting in Mina. They will spend their time reciting the Qur’an, remembering God and praying in the narrow valley that is situated east of Makkah and is surrounded by rocky mountains. Every year, the area is transformed into a vast encampment for pilgrims made up of smaller tents.

Pilgrims will pray Dhuhr, Asr, Maghrib and Isha in Mina on Sunday, in addition to the Fajr prayer on Monday morning. They will then leave Mina for Arafat where they will spend the day worshipping God and praying for their needs.

The day of Arafat is considered the pinnacle of the Hajj and Muslims all around the world consider it a blessed day during which sins are forgiven and prayers are answered.

Muslims who are not performing Hajj will often fast on the day of Arafat following the tradition of the Prophet. Earlier, pilgrims performed tawaf at the Grand Mosque in Makkah where they followed markings on the floor to ensure social distancing.

Strict precautionary measures are being taken to prevent coronavirus spread, and only 60,000 pilgrims from within Saudi Arabia were selected to perform Hajj this year.

Thermal cameras have been placed at entrances of the Grand Mosque to monitor the temperature of pilgrims and the mosque is sterilised at regular intervals. Civil Defence teams are also on standby to ensure the safety and protection of pilgrims at all times.