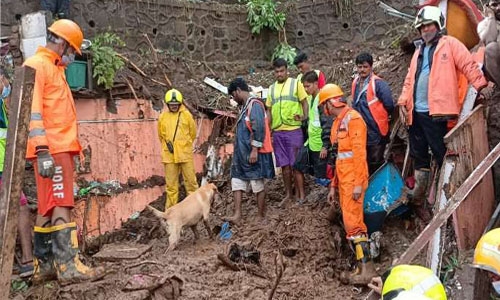 As many as 24 people were killed and several injured in separate building collapse incidents in Mumbai Sunday due to incessant rains.

Rescue operations are underway, as civic authorities look for survivors in the building collapses and landslides.

About 17 people died when a wall collapsed in Chembur due to landslides, the other two incidents occurred in Vikhroli and Bhandup.

Many railway tracks in Mumbai was were also waterlogged after continuous heavy rainfall. However, services on Central Railway have restarted. Trains on the Western Railway are also reported to be running. Routine movement of commuters’ was also affected as roads waterlogged in Gandhi Market area.

On Saturday, the India Meteorological Department (IMD) issued an Orange alert for Mumbai and predicted rains in the city for the next 24 hours.

Sion, Chembur, Gandhi market, Andheri market, RCF colony, LBS Road and Wadala Bridge are among the areas that have been affected by the heavy rains, BEST Traffic Control had said.

According to Brihanmumbai Municipal Corporation (BMC), Tulsi lake, one of the two lakes that supply water to the BMC area started overflowing due to rains. The lake supplies an average of 18 million litres of water to Mumbai per day.

Due to the rains in the catchment area of the lake over the past few days, the lake has started overflowing, according to the water engineer department of the corporation