Saudi Arabia will judge new Iran president Raisi by ‘reality on the ground’: FM | THE DAILY TRIBUNE | KINGDOM OF BAHRAIN 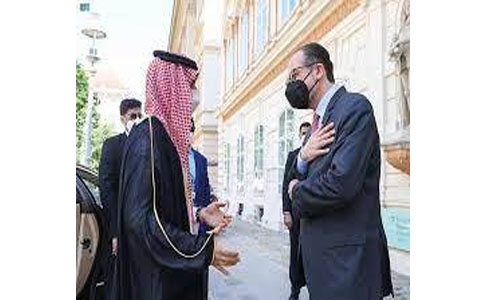 Saudi Arabia will judge Iranian President-elect Ebrahim Raisi’s government by “the reality on the ground,” the Kingdom’s foreign minister said on Tuesday.
“From our perspective, foreign policy in Iran is in any case run by the supreme leader (Ayatollah Ali Khamenei) and therefore we base our interactions and our approach to Iran on the reality on the ground, and that is what we will judge the new government on, regardless of who is in charge,” Prince Faisal bin Farhan told a news conference with his Austrian counterpart during his official visit to the capital, Vienna.
He said he was “very concerned” about unanswered questions on Iran’s nuclear program, an apparent reference to the UN nuclear watchdog seeking explanations on the origin of uranium particles found at undeclared sites in Iran.

Saudi Arabia and Gulf allies continue to pressure Iran over its nuclear program, which Tehran says is entirely peaceful, and it's ballistic missiles. US intelligence agencies and the International Atomic Energy Agency believe Iran had a secret, coordinated nuclear weapons program that it halted in 2003.
Raisi, a hard-line judge who secured an expected election victory on Saturday, said on Monday he wanted to improve ties with Gulf Arab neighbours.

Biden administration officials are insisting that the election of Raisi won’t affect prospects for reviving the faltering 2015 nuclear deal with Tehran. But there are already signs that their goal of locking in a deal just got tougher, according to The Associated Press.

Optimism that a deal was imminently faded as the latest talks ended on Sunday without tangible indications of significant progress.

Raisi is likely to raise Iran’s demands for sanctions relief in return for Iranian compliance with the deal, as he himself is already subject to US human rights penalties.

“I don’t envy the Biden team,” said Karim Sadjapour, a senior fellow at the Carnegie Endowment for International Peace who has advised multiple US administrations on Iran. “I think the administration now has a heightened sense of
the urgency to revise the deal before Raisi and a new hard-line team is inaugurated.”

Prince Faisal said the Houthi militia has regularly rejected initiatives for a complete cease-fire, and have always resorted to escalating the situation.

Prince Faisal met for talks with Schallenberg at the Austrian Ministry of Foreign Affairs, where the two sides discussed opportunities for cooperation, developing bilateral relations, and ways to develop them in various fields, especially in light of the Kingdom’s Vision 2030, the Kingdom’s foreign ministry said.
They also discussed ways to enhance joint coordination to serve the interests of the two countries and the most prominent regional and international developments.
(With Reuters)

Saudi Arabia and Gulf allies continue to pressure Iran over its ballistic missiles and the nuclear program, which Tehran says is entirely peaceful.

US intelligence agencies and the International Atomic Energy Agency believe Iran had a secret, coordinated nuclear weapons program that it halted in 2003.