Israel kills 42 in deadliest single attack in Gaza, Netanyahu warns ‘war will go on’ | THE DAILY TRIBUNE | KINGDOM OF BAHRAIN 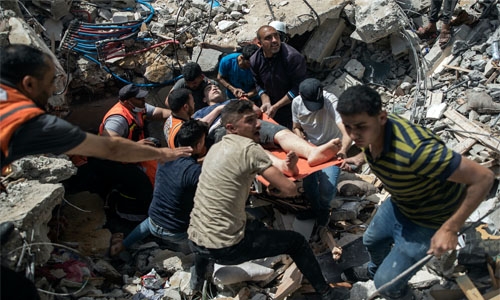 Israeli airstrikes on Gaza City flattened three buildings and killed at least 42 people yesterday, Palestinian medics said, in the deadliest single attack in the latest round of violence.

Despite the toll and international efforts to broker a cease-fire, Israeli Prime Minister Benjamin Netanyahu signalled the fourth war with Gaza’s Hamas rulers would rage on.

In a televised address, Netanyahu said the attacks were continuing at “full-force” and will “take time.” Israel “wants to levy a heavy price” on the Hamas militant group, he said, flanked by his defence minister and political rival, Benny Gantz, in a show of unity.

Hamas also pressed on, launching rockets from civilian areas in Gaza towards civilian areas in Israel. One slammed into a synagogue in the southern city of Ashkelon hours before evening services for the Jewish holiday of Shavuot, Israeli emergency services said.

No injuries were reported. In the Israeli air assault early yesterday, families were buried under piles of cement rubble and twisted rebar.

A yellow canary lay crushed on the ground. Shards of glass and debris-covered streets blocks away from the major downtown thoroughfare where the three buildings were hit over the course of five minutes around 1 am.

The hostilities have repeatedly escalated over the past week, marking the worst fighting in the territory that is home to 2 million Palestinians since Israel and Hamas’ devastating 2014 war.

“I have not seen this level of destruction through my 14 years of work,” said Samir al-Khatib an emergency rescue official in Gaza. “Not even in the 2014 war.”

Rescuers furiously dug through the rubble using excavators and bulldozers amid clouds of heavy dust. One shouted “Can you hear me?” into a hole. “Are you OK?” he asked. Minutes later, first responders pulled a survivor out. The Gaza Health Ministry said 16 women and 10 children were among those killed, with more than 50 people wounded.

Haya Abdelal, 21, lives in a building next to one that was destroyed and said she was sleeping when the airstrikes sent her fleeing into the street.

She accused Israel of not giving its usual warning to residents to flee before launching such an attack. “We are tired,” she said, “We need a truce. We can’t bear it anymore.” The Israeli army spokesperson’s office said the strike targeted Hamas “underground military infrastructure.” As a result of the strike, “the underground facility collapsed, causing the foundation of the civilian houses above them to collapse as well, leading to unintended casualties.”