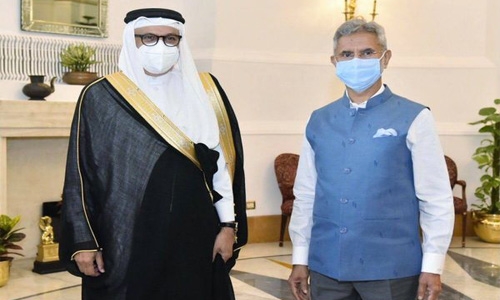 They discussed matters of bilateral cooperation in wide-ranging areas including coordination in parliamentary matters between the two friendly countries.

The Vice-President praised the friendship and cooperation between the two friendly countries and people and the development, and progress of their relations at all levels.

He also stressed the importance of continuous communication between senior officials in the two countries and expanding the horizons for bilateral cooperation to serve the common interests.

The Vice-President expressed his thanks to the Kingdom for hosting a large number of Indian expatriates, praising the care and attention paid by His Majesty King Hamad bin Isa Al Khalifa, especially in light of the repercussions of the pandemic.

He lauded the directives of His Majesty and the efforts made by His Royal Highness Prince Salman bin Hamad Al Khalifa, the Crown Prince and Prime Minister, to combat the pandemic and provide free health care and vaccines to members of the Indian community.  Bahrain is a key partner of India among the Gulf countries. More than 350,000 Indians are living and working in Bahrain, and are major contributors to its progress and development.

The Foreign Minister conveyed the greetings and appreciation of HM the King and HRH Prince Salman to India President Ram Nath Kovind, Vice President Naidu, and Prime Minister Modi, along with their wishes of further development and progress to India and its friendly people.

Dr Al Zayani expressed his pleasure to visit India and praised the historical friendship between the two countries, which is based on mutual respect and coordination.

The Foreign Minister delivered a speech in which he expressed his sincere thanks for holding the third HJC meeting despite the pandemic.

He praised the close and deep-rooted relations between the two countries, noting the common desire to consolidate these bilateral relations and further developing them in the coming years.