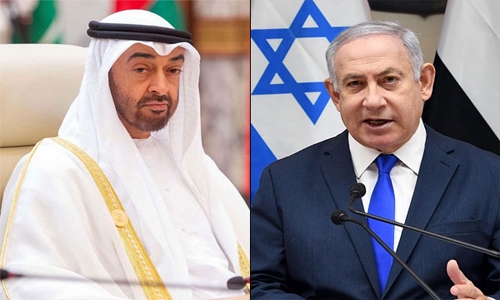 Israeli Prime Minister Benjamin Netanyahu and Abu Dhabi Crown Prince Mohammed bin Zayed Al Nahyan have been nominated for the next year's Nobel Peace Prize for their roles in establishing diplomatic ties between their countries, said the Israeli premier's office on Tuesday.

On September 15, US President Donald Trump presided over a signing ceremony at the White House to establish the foundation of the peace agreements among Israel, Bahrain and the UAE.

According to the Abraham Accord signed by the two Gulf countries, Bahrain and the UAE, they have now joined Egypt and Jordan as the only Arab nations to have full relations with Israel.

After the signing of the Abraham Accord by Netanyahu, Bahrain's foreign minister Abdullatif bin Rashid Al Zayani and Al Nahyan, Trump called on other Arab and Muslim nations to follow the UAE's lead.

Along with the two heads of state, it was announced in September that Trump has been nominated for the 2021 Nobel Peace Prize following his efforts to broker peace between Israel and the UAE.

The nomination was submitted by Christian Tybring-Gjedde, a member of the Norwegian Parliament, citing his “key role in creating new dynamics in other protracted conflicts, such as the Kashmir border dispute between India and Pakistan.”