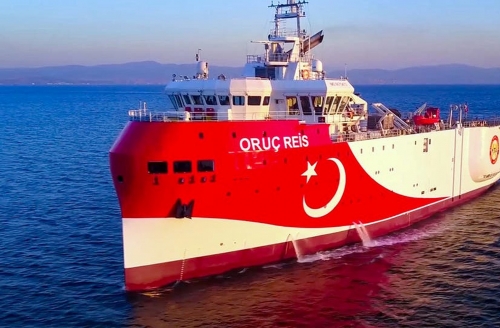 A Turkish exploration ship returns to its list after international pressure

world September 13, 2020
Eastern Mediterranean
ABOARD THE YAVUZ DRILL SHIP
Two Turkish drillships are continuing operations in the eastern Mediterranean and another ship will join them this month, Energy Minister Fatih Donmez said, as a dispute over natural resources there fuels tensions between Turkey and Cyprus.

EU member Cyprus and Turkey have argued for years regarding the ownership of fossil fuels in the eastern Mediterranean, where Ankara says Turkish Cypriots are entitled to a share of the resources.

Turkey has sent two drilling ships, Fatih and Yavuz, as well as an exploration vessel, to operate in waters off the divided island of Cyprus, prompting accusations from Greece that it is undermining security in the region.

Aboard the Yavuz drillship, off the northeastern coast of Cyprus, Donmez told reporters that a second exploration vessel would begin work in the area by the end of August. A Turkish frigate and patrol boat accompanied the Yavuz.

17 million dinars to accounts this Tuesday