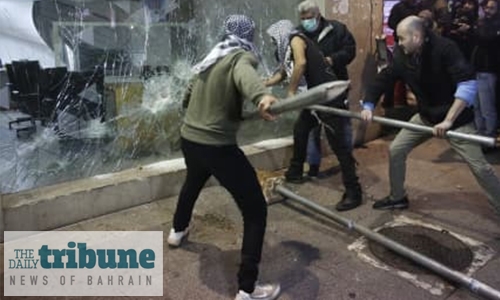 Protesters in Lebanon burned tires, blocked roads and brought traffic in Beirut to a standstill yesterday in renewed demonstrations against economic hardship and government corruption.

In Tripoli, protesters clashed with army and internal security forces. An officer was hit in the head by a stone, and a protester was hit by a rubber bullet. The demonstrations, which began in October and led swiftly to the resignation of Saad Hariri as prime minister, had been scaled back in recent weeks amid negotiations to form a new government.

But angry protesters returned to the streets on Tuesday to complain about unemployment and financial meltdown, as the Lebanese lira plunged in value to 2,500 against the US dollar, compared with the official exchange rate of 1,515. “We gave them a month to form a new government, so they thought we were weak and they went back to their corruption,” said one woman standing on the Ring Bridge with protesters waving Lebanese flags.

“They proved that they do not care about the people or the economic collapse that the country is experiencing, so we decided to return to the streets.” Another activist said: “We want a government that will save the country from the abyss it has fallen into.” One woman from Tripoli complained: “I do not work, my children are unemployed, politicians do not care.”

Protesters from Beirut ’s southern suburbs joined a demonstration outside the Central Bank, chanting against the governor and his policies of restricting dollar transactions and deposit withdrawals.

Others gathered outside the Beirut home of the newly designated Prime Minister, Hassan Diab, calling for his resignation less than a month after he was appointed. President Michel Aoun said obstacles remained to the creation of a new administration.

“Although we do not have the luxury of delay, the formation of this government requires the selection of qualified candidates, worthy of the confidence of both the people and the Parliament, which in turn requires time,” he said.