Taliban attacks Afghan US base | THE DAILY TRIBUNE | KINGDOM OF BAHRAIN 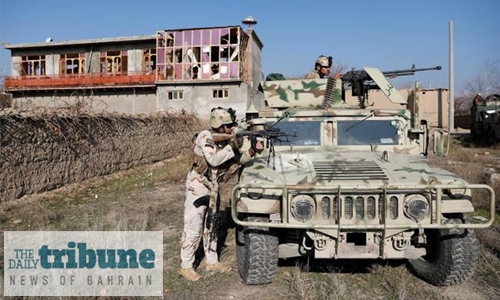 Taliban attacks Afghan US base

Taliban suicide bombers targeted a key US military base in Afghanistan yesterday in a major attack that killed two civilians and wounded more than 70 others, officials said, amid renewed peace talks between the United States and the militants. The early morning assault began when a suicide bomber detonated his explosive-packed vehicle outside a hospital building near Bagram military base in Parwan province, north of the capital Kabul, according to local officials.

Seven more gunmen, some wearing suicide vests are believed to have then entered the building -- which was under construction and not operational -- in order to use it as a launching pad for attacks against the nearby US base, local officials said. An Afghan interior ministry spokesman, Nasrat Rahimi, said on Twitter that all the attackers inside the hospital compound were killed fighting Afghan and foreign forces.

At least two Afghan civilians, including one woman, were killed while 73 others were wounded in the explosion that damaged houses up to 300 metres (yards) away, Rahimi said. A Taliban spokesman later claimed responsibility for the attack, claiming that “tens” of US and Afghan soldiers had been killed or wounded.