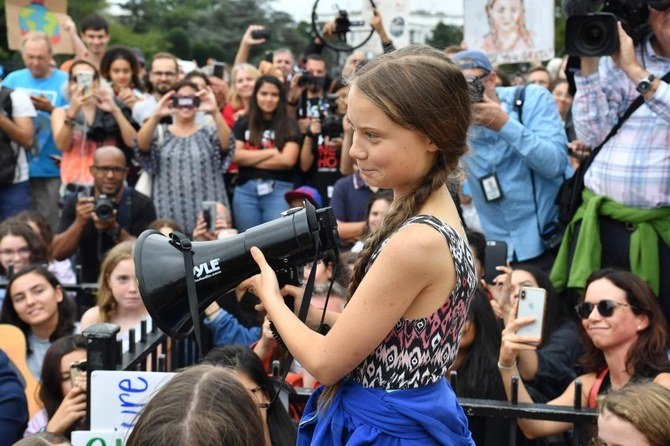 Climate activist Greta Thunberg is Time ‘person of the year’

Swedish climate activist Greta Thunberg was named Time’s “person of the year” Wednesday, becoming at age 16 the youngest person to whom the US magazine has given the title.
Thunberg emerged as the face of the youth climate movement after she started skipping school once a week to protest outside her country’s parliament. In the past year and a half, she has drawn large crowds at international conferences and demonstrations outside Sweden.
Some have welcomed Thunberg’s environmental activism, including her speeches challenging world leaders to do more to stop global warming. But others have criticized the teenager’s sometimes combative tone.
“For sounding the alarm about humanity’s predatory relationship with the only home we have, for bringing to a fragmented world a voice that transcends backgrounds and borders, for showing us all what it might look like when a new generation leads, Greta Thunberg is TIME’s 2019 Person of the Year,” the media franchise said Wednesday on its website.
Leaving a United Nations climate conference in Madrid where she addressed negotiators on Wednesday, Thunberg told The Associated Press she was “a bit surprised” by Time’s recognition, which she dedicated to all young activists.
Thunberg said she was hopeful the message of urgency she and other activists are communicating — that governments need to drastically increase their efforts to combat climate change — is finally getting through.
She said the experience of the past 15 months, going from solo-protester outside the Swedish parliament to addressing world leaders at the UN General Assembly, had changed her.
“I think life is much more meaningful now that I have something to do that has an impact,” Thunberg said in a phone interview.
She plans to head home to Sweden for some rest during the holidays. “If you don’t take breaks, you won’t be able to continue,” she said.
Last year’s Time winners included slain Saudi journalist Jamal Khashoggi; the staff of the Capital Gazette in Annapolis, Maryland, where five people were shot to death; Philippine journalist Maria Ressa; and two Reuters journalists, Wa Lone and Kyaw Soe Oo.

Big sale and 'snow' in Dubai this festive weekend