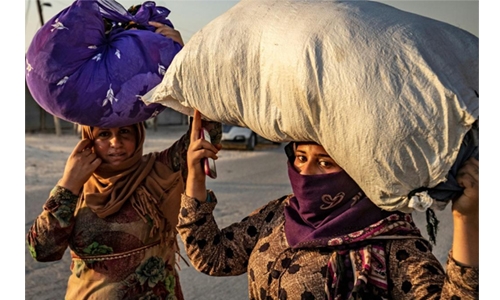 Syria’s Kurds battled to hold off a Turkish invasion yesterday after air strikes and shelling launched a long-threatened operation that could reshape the country and trigger a humanitarian crisis. Bahrain, Saudi Arabia, Egypt, the UAE as well as senior members of US President Donald Trump’s own Republican Party condemned him for making way for the incursion and abandoning Syrian Kurds.

Bahraini viewed the aggression as “a violation of the rules of international law and an attack on the sovereignty and territorial integrity of Syria.” Saudi Arabia said the attack is as a blatant violation of the unity, independence and sovereignty of the Syrian territories. US President Donald Trump tried to justify the de facto green light he gifted his Turkish counterpart Recep Tayyip Erdogan for an assault seen as a blatant betrayal of Washington’s erstwhile Kurdish allies.

Syrian Kurdish forces lost 11,000 personnel and played a key role in the years-long battle to eliminate the “caliphate” the Islamic State group had set up in the region. In scenes all too familiar since the start of Syria’s war more than eight years ago, thousands of civilians were seen fleeing their homes yesterday, in vehicles or on foot with their belongings on their backs.

The broad offensive -- which Erdogan dubbed “Operation Peace Spring” -- drew international outrage and warnings, including from within Trump’s own camp, and will be discussed in an emergency meeting of the UN Security Council. After launching the assault with air strikes and intense artillery fire, the Turkish military and its Syrian proxies crossed the border into Kurdish-controlled areas.

The Kurdish-led authority in northern Syria said a prison struck by Turkish shelling holds “the most dangerous criminals from more than 60 nationalities” and Turkey’s attacks on its prisons risked “a catastrophe”.