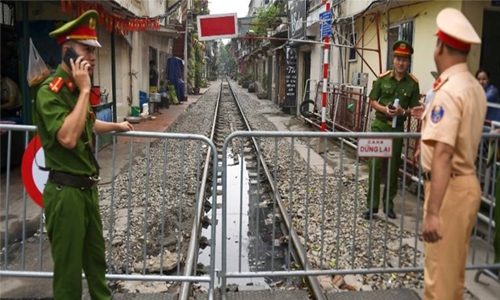 Selfie-snapping tourists railed against the closure of Hanoi’s ‘train street’ yesterday after police blocked off the Instagram-famous tracks for safety reasons. The narrow railway corridor in central Hanoi has become a hotspot among visitors seeking the perfect holiday snap on the tracks -- often dodging trains that rumble through daily.

But Hanoi authorities said this week they would block people from the tracks to avoid accidents, and police on Thursday erected barricades to keep out disappointed visitors. “I’m very frustrated because today I can’t go in and take a picture,” Malaysian tourist Mustaza bin Mustapha said, vowing to come back later.

Dozens of other tourists were turned away, though some managed to get onto still-open sections of the railway, moving out of the way as an afternoon train chugged past. Built by former colonial rulers, the railway once shipped goods and people across France’s former Indochina colony and remains in use today by communist Vietnam’s state-run railway company.