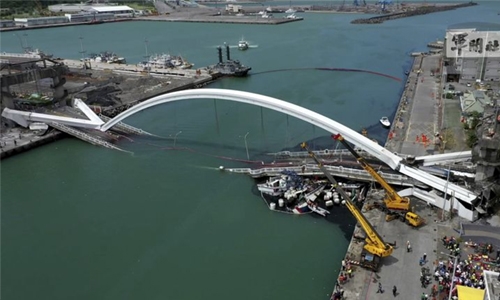 Taiwanese rescuers yesterday retrieved the body of the last missing person killed when a bridge collapsed two days ago, smashing onto fishing boats moored underneath. A total of six fishing workers from Indonesia and the Philippines were killed in the incident, which also left 12 people injured according to the National Fire Agency.

The body of the last missing Filipino was recovered from the waters around noon, ending a round-the-clock search operation since the bridge collapsed on Tuesday, the agency said. Authorities have launched an investigation into the cause of the collapse and said the families of the deceased would receive Tw$5 million ($161,000) in compensation.

Dramatic CCTV footage captured the moment the 140-metre (460-foot) long single-arch bridge came crashing down early on Tuesday morning in Nanfangao, on Taiwan’s east coast. In the video, a vertical cable at the centre of the bridge’s steel arch suddenly snaps. The road then collapses into the water, crashing down on three fishing boats as a petrol tanker, which nearly made it across, also plunged into the water and burst into flames.

Taiwan was skirted by a typhoon on Monday night, which brought heavy rains and strong winds to parts of the east coast. But at the time of the bridge collapse, the weather was fine. The local landmark was completed in 1998 and spanned a small fishing port. Taiwan has a huge fishing industry and many of those who work on its boats are low-paid migrant workers from countries such as the Philippines, Indonesia and Vietnam.