‘Right to defend’ | THE DAILY TRIBUNE | KINGDOM OF BAHRAIN 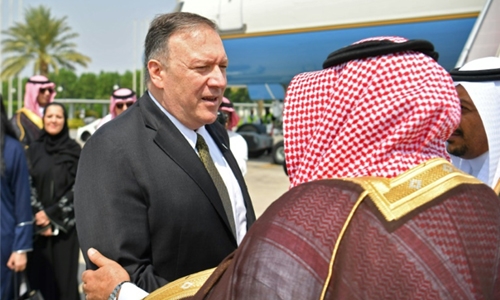 US Secretary of State Mike Pompeo yesterday said the United States supports Saudi Arabia’s “right to defend itself” in a meeting with Crown Prince Mohammed bin Salman. Pompeo condemned the attacks and said Iran’s behaviour would “not be tolerated” but said he preferred a “peaceful resolution” to the crisis while in UAE.

“I hope the Islamic Republic of Iran sees it the same way,” he told reporters after talks with the leaders of the United Arab Emirates. Pompeo arrived in Abu Dhabi from the Saudi city of Jeddah, where late Wednesday he met Crown Prince Mohammed bin Salman, who has said the assault poses a “real test” of global will. The two sides agreed “the Iranian regime must be held accountable for its continued aggressive, reckless, and threatening behaviour,” State Department spokeswoman Morgan Ortagus said.

The “unacceptable and unprecedented attack... not only threatened Saudi Arabian national security but also endangered the lives of all the American citizens living and working in Saudi Arabia,” she added. In an earlier statement, describing the attack as an “act of war” Pompeo said Washington and Riyadh will hold Tehran accountable for the unprovoked strike.

Saudi officials Wednesday unveiled what they said were fragments of 25 drones and cruise missiles fired Saturday at the facilities in the country’s east, engulfing them in flames. “The attack was launched from the north and unquestionably sponsored by Iran,” defence ministry spokesman Turki al-Maliki said. Tehran-linked Huthi rebels in Saudi Arabia’s southern neighbour Yemen have claimed responsibility, but both Washington and Riyadh have ruled that out, saying it was beyond their capabilities. French Foreign Minister Jean-Yves Le Drian also said the Huthi claim “lacks credibility”.

Huthi military spokesman Brigadier Yahya Saree also threatened the United Arab Emirates, saying it was ready to attack dozens of targets including the skyscraper-filled cities of Dubai and Abu Dhabi. US officials quoted said the most damning evidence against Iran was unreleased satellite photos showing Iran’s Revolutionary Guard Corps making preparations for the attack at its Ahvaz airbase. An international inquiry is underway, with the United Nations saying experts had arrived in the kingdom and begun their mission “at the invitation of the Saudi authorities”.

The United Arab Emirates yesterday followed its ally Saudi Arabia in announcing it was joining a global maritime security coalition that Washington has been trying to build since a series of explosions on oil tankers in Gulf waters in recent months.

Pompeo, who arrived in the UAE from Saudi Arabia yesterday, welcomed the move on Twitter: “Recent events underscore the importance of protecting global commerce and freedom of navigation.”