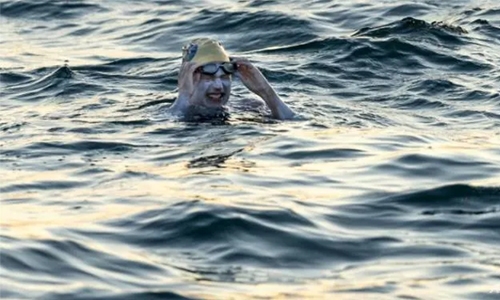 An American breast cancer survivor yesterday became the first person to swim across the English Channel four times non-stop in a 54-hour feat of endurance. Sarah Thomas, 37, an open water marathon swimmer from the US state of Colorado, could be seen in a video posted on Facebook arriving at Dover on the southern English coast with a group of supporters cheering her on.

“I feel a little sick,” she is heard saying following the herculean effort, which reportedly saw her cover close to 130 miles (209 kilometres) due to strong tides. “I just can’t believe we did it,” Thomas told the BBC. “I’m really just pretty numb. There was a lot of people on the beach to meet me and wish me well and it was really nice of them, but I feel just mostly stunned.”

Thomas said the hardest part was dealing with the salt water, which left her throat and mouth sore, while she also got stung in the face by a jellyfish. The athlete relied on a protein recovery drink mixed with electrolytes and caffeine -- which was tied to a rope and thrown to her every 30 minutes -- to complete the feat, according to her mother.

Endurance swimmer Lewis Pugh wrote on Twitter that her achievement was “extraordinary, amazing, super-human”. “Just when we think we’ve reached the limit of human endurance, someone shatters the records,” he wrote.

In a post on Saturday before setting off, Thomas wrote: “This swim is dedicated to all the survivors out there. “This is for those of us who have prayed for our lives, who have wondered with despair about what comes next, and have battled through pain and fear to overcome,” she wrote. The marathon swimmer received the cancer diagnosis four months after an unprecedented August 2017 non-stop solo swim of 104.6 miles in Lake Champlain on the US-Canada border.

She underwent treatment for the aggressive form of breast cancer -- which had already begun spreading to the lymph nodes under one of her arms -- in the summer of 2018, according to a fundraising website for a documentary about her achievements. “I was at the peak of my athletic accomplishments... and then I got diagnosed with cancer,” Thomas said in a video posted on the Kickstarter website. “It’s part of who I am now, part of my story. I just hope it never comes back but if it does, to know that I did everything I wanted to do in life.”

In the video Thomas, who finished her first open-water event in 2007 and had previously made two Channel swims in 2012 and 2016, said swimming across the Dover Strait had been a lifelong dream and “just as hard as climbing Mount Everest”. “When you’re a kid you just dream of swimming the English Channel.”