Call for united front | THE DAILY TRIBUNE | KINGDOM OF BAHRAIN 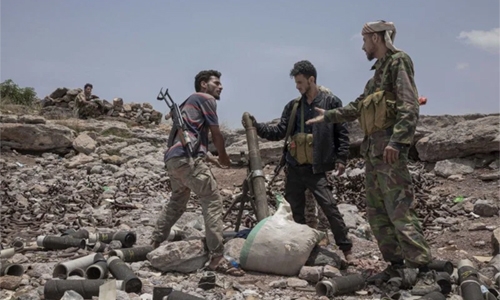 The UAE and Saudi Arabia believe a united front is needed in Yemen to combat the Houthi rebels and reinstate the internationally recognised government, a statement by the Arab Coalition countries said yesterday. Talks between the government and the Southern Transitional Council took place last Thursday in Jeddah under the Saudi government’s mediation. The intervention of Riyadh is seeking to end recent fighting in Yemen’s southern provinces.

“We welcome the response of the Yemeni government and the Southern Transitional Council’s call for dialogue,” the statement said. “We assert the importance of completely halting all military actions, or violations against public and private property.” The UAE and Saudi Arabia went on to reaffirm their “continued support for the legitimate government of Yemen in its efforts to maintain the integrity of the Yemeni state while defeating the Houthi militias and terrorist organisations operating in Yemen, in addition to curbing Iranian expansionism”.

Both countries said that they have been working in close co-ordination with various parties to implement a ceasefire in preparation for constructive dialogue that aims to end the conflict and address its reverberations. The joint statement concluded with a declaration that the two countries will continue providing humanitarian assistance to Yemeni governorates liberated from Houthi control. The Southern Transitional Council responded with its own statement, welcoming the UAE and Saudi joint statement. Spokesman Nazar Haitham said “dialogue and peace are what the STC have called for from the start”.

The Saudi-UAE statement came as a joint committee negotiating the redeployment of forces from Yemen’s port city of Hodeidah boarded a UN ship in the Red Sea over the weekend to resume talks over the pullback from the key ports in the city. Representatives of the government and the Houthi rebels boarded the Antarctic Dream on Saturday night to join the UN representatives on board, Col Wathah Al Dubaish, the spokesperson of the pro-government joint forces on the country’s west coast told The National.

Sunday’s meeting was monitored by the UN Redeployment and Co-ordination Committee, led by Lebanese General Hani Nakhlah – the disengagement observer for the UN committee. He is leading the current round of negotiations after the head of the committee, Danish General Michael Lollesgaard, left his post and returned home in July 2019, Col Al Dubaish said.