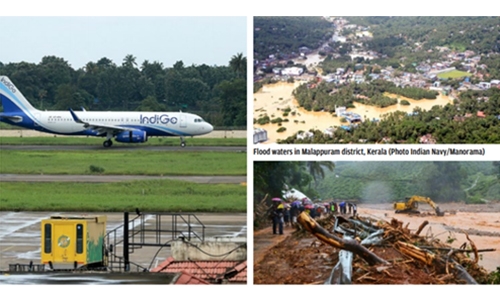 Emergency responders and rescue workers were racing against time yesterday looking for signs of life at the site of the two biggest landslides in Kerala as incessant rains continuing for the last three days eased. Death toll from monsoon floods which cut off roads in India’s south and west rose to at least 144.

Heavy rains and continuing landslides had forced rescuers to halt their efforts at Kavalappara in Malappuram were a hill washed away trapping 60 houses and Meppadi, Wayanad district were a 100-acre tea estate was swept away.

Official figures by ANI puts the current toll in Kerala at 72 between August 8 and 10 with 1,65,519 people evacuated to 1,318 relief camps.  Every year monsoon rains hammer India and other countries across Southeast Asia, submerging homes, displacing residents and triggering landslides.

Bad weather and damaged infrastructure were affecting rescue and relief work, a senior police officer in Kerala said. With the meteorological department issuing further alerts for rains and heavy winds, the National Disaster Relief Force (NDFR), army and the local police have pitched in yesterday in Kerala with helicopters flying to deliver supplies to isolated locations in Malappuram.

Meanwhile, normal operations resumed at Cochin International Airport with airlines operating as per schedule two days after shutting due to inundation of the runway. The water level in the Periyar river and a canal adjacent to the airport rose due to heavy rains. The Abu Dhabi-Kochi Indigo flight touched down at around 12.15 pm, marking the resumption of the operations, a PTI report said.

Chief Minister Pinarayi Vijayan held a meeting with senior officials yesterday morning to review the situation.  They also discussed the search operations at Kavalappara and Puthumala in Malappuram and Wayanad districts respectively, where several people are feared to have been buried alive four days ago in two major landslides. “Idukki dam is only 36.61 per cent full, Pampa 63.61pc, Kakki 38.13pc, in contrast to eight dams that were nearly full last year,” Vijayan said.

However, the state has opened the gates of nearly-full Banasura Sagar dam in Wayanad. “Last year’s floods were the biggest one after 1924. This year, the rains came when we were recovering from the previous one. Kozhikode, Wayanad, Malappuram and Idukki has suffered the most damage, most casualties owing to landslides. Like last year, we need everybody’s support to come out of this,” Vijayan said.

Rahul Gandhi, Congress leader, arrived in his Wayanad Lok Sabha constituency to review the extent of the damage caused by flood and landslides.  “For the next few days, I will be based in my Lok Sabha constituency, #Wayanad that has been ravaged by floods. I will be visiting relief camps across Wayanad and reviewing relief measures with District and State officials,” he tweeted. Gandhi said he had spoken to Prime Minister Narendra Modi, Kerala Chief Minister Pinarayi Vijayan, the district collector of Wayanad and Congress workers in the state regarding the flood situation in his constituency.

Meanwhile, Minister of State for External Affairs V Muraleedharan told the media in New Delhi that the Centre had allotted Rs 52.27 crore for the flood-hit state. ‘We had allotted Rs 2,107 crore (to Kerala) last year. The state is yet to utilise around Rs 1,400 crore (of that amount). Still, we have allotted Rs 52.27 crore for the flood-hit state,’ he said. The minister also said the Kerala government was updating the Centre about the flood situation in the state.

Trivandrum district collector’s Facebook post saying, “there is no immediate demand (of relief materials)” also created a controversy, which was later defended by CM saying it was posted on Friday when the focus was on the rescue.

The flood toll also increased in adjoining Karnataka state, where at least 34 people are now confirmed dead. News agency ANI reported that Union Home Minister Amit Shah will do an aerial survey of the flood-affected areas of Belagavi district. “At least 14 others are still missing. We have rescued around 480,000 people, over 50,000 animals and set up around 1,100 relief camps which have over 300,000 people,” a Karnataka government official said.

He said at least 136 roads and highways across the state had either been damaged or remain cut off because of floodwaters. “The rains have eased in the upstream Maharashtra state but some reservoirs in the region have received record inflows and will have to be opened,” he added. “It is an unprecedented situation. We expect the flows to reduce in the next four-five days if there aren’t any more rains.”

At least 27 people have also lost their lives in Maharashtra, where several key towns have been underwater over the last few days, media reports said.

Meanwhile accidents caused by heavy rains in Gujarat, the home state of India’s Prime Minister Narendra Modi, have taken the lives of at least 16 people. While the monsoon rains are crucial to replenishing water supplies, they kill hundreds of people every year.