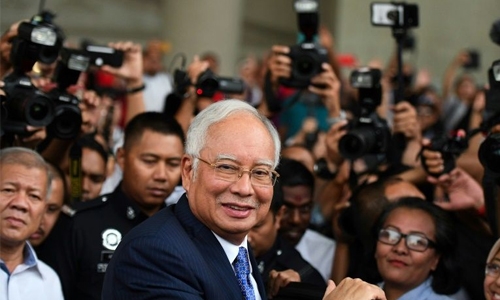 Credit cards belonging to Malaysia’s disgraced ex-leader Najib Razak were used to spend over $800,000 in one day at a luxury jeweller in Italy, a court has heard. The 2014 spending spree is the latest evidence of what critics say is the lavish lifestyle enjoyed by Najib after he and his cronies allegedly plundered state coffers.

The former prime minister, his family members and inner circle are accused of stealing billions of dollars from Malaysian sovereign wealth fund 1MDB in a fraud that stretched around the world. The claims played a major part in Najib’s government losing power at elections last year.

He was arrested after being ejected from office, and went on trial over the scandal in April. At a hearing in the case Monday, a bank official said two credit cards belonging to the ex-leader were used to spend 3.3 million ringgit ($803,000) at a branch of Swiss jeweller De Grisogono in Italy, state news agency Bernama reported. The money was spent on August 8, 2014, said Yeoh Eng Leong, a senior official from Malaysian lender AmBank, although he did not disclose what was bought, Bernama reported.

The cards were also used to pay over 460,000 ringgit at a Chanel boutique in Hawaii and over 120,000 ringgit at a Shangri-La Hotel in Bangkok, he told the Kuala Lumpur court. Najib defended the Italian spending spree. “This expenditure is for a gift to a senior member of the royalty of a government and their entourage that has good relations with our country,” he said in a Facebook post. “It is normal to give gifts to leaders of other governments”.

The current trial is the first of several that Najib is expected to face over 1MDB, and centres on claims 42 million ringgit was stolen from SRC International, a former unit of the fund. During his years in office, Najib and his luxury-loving wife Rosmah Mansor -- who has also been charged over the fraud -- came to symbolise the rot in Malaysia’s elite. Following the election, police discovered valuables, including cash, jewellery and luxury handbags, worth up to $273 million in properties linked to the couple.