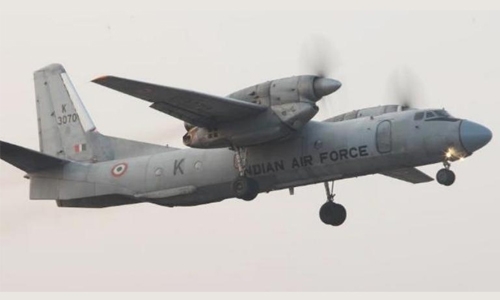 Indian authorities yesterday spotted the wreckage of a plane missing with 13 air force personnel aboard after days of searching a remote mountainous region close to China. The Soviet-built AN-32 plane, carrying eight crew and five passengers, disappeared from radar on June 3 in the northeastern state of Arunachal Pradesh, prompting a frantic search by the Indian Air Force (IAF) and ground teams.

“The wreckage of the missing #An32 was spotted today... at an approximate elevation of 12,000 ft by the #IAF Mi-17 Helicopter undertaking search in the expanded search zone,” the IAF said on Twitter. “Efforts are now continuing to establish the status of occupants & establish survivors.” Desperate authorities last week announced a cash reward of 550,000 rupees ($8,000) for any information about the plane.

They also urged village chiefs to organise search parties to scour the Mechuka jungle in the mountainous region. The twin-engine plane lost contact with ground control 35 minutes after taking off. In 2016, another AN-32 -- flying from Chennai to the Andaman and Nicobar Islands -- went missing above the Bay of Bengal. It had 29 people aboard and was never found.