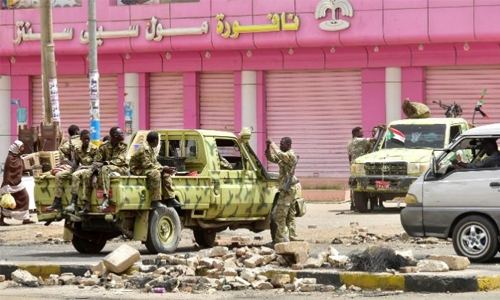 A protest strike kept businesses shut and residents indoors in the Sudanese capital yesterday as a top US diplomat prepared a visit to press the ruling generals to halt a bloody crackdown. Protest leaders stepped up the pressure on the generals by announcing they would soon release a list of members for a new ruling body -- the key point of dispute between the two sides.

Most shops and businesses remained closed on the third day of a civil disobedience campaign launched by protest leaders after a crackdown on a weeks-long sit-in left dozens dead on June 3. Public buses were operating in some parts of the capital, but Khartoum’s main business and commercial districts were shut down, an AFP correspondent reported.

Paramilitaries of the Rapid Support Forces -- accused by witnesses, protesters and human rights groups of having played the lead role in the June 3 crackdown -- patrolled several districts of the city in their trademark pickup trucks fitted with heavy machine guns. Fewer people were on the streets than usual.

“In the last three days, we have lost a lot of money,” said Ibrahim Omar, an employee at a tour firm. Travel agencies have been hit hard by a nationwide internet blackout on Monday. “We cannot do anything. We are not doing any international flight bookings. I hope it does not continue like this,” Omar said.

But protesters say their shutdown is already successful. “This shows clearly what we can do, and also in a peaceful way,” said Ishraga Mohamed. “Such a campaign does not lead to killing people and at the same time puts pressure on the military council. We will continue with it until our goal is achieved,” she told AFP. Protest leaders vowed to name a new ruling body to replace the generals.

Since toppling longtime President Omar al-Bashir on April 11, the generals have resisted demonstrators’ demands, backed by Western and most African governments, to make way for a civilian-led transition.

US call to stop attacks

The US assistant secretary of state for African affairs, Tibor Nagy, plans to meet both the generals and protest leaders in Khartoum, the State Department said. He is to leave on the trip on Wednesday and also visit Addis Ababa to discuss the Sudan crisis with Ethiopian leaders and the African Union.

“He will call for a cessation of attacks against civilians and urge parties to work toward creating an enabling environment” for talks to resume, the State Department said on Monday