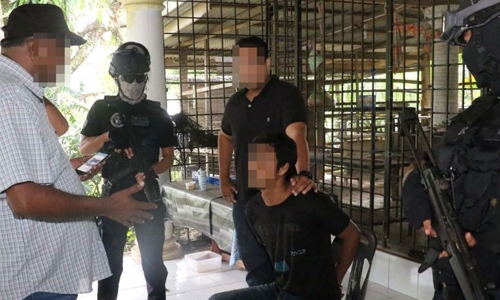 Malaysian police said they have arrested four militants linked to the Islamic State (IS) group who were in possession of explosives and planned to attack non-Muslim places of worship. The suspects -- a Malaysian who led the group, two Rohingya from Myanmar and one Indonesian -- were detained last week in raids around Kuala Lumpur and in eastern Terengganu state.

Malaysia’s national police chief Abdul Hamid Bador described them as an “Islamic State cell” and said they planned to “assassinate high-profile individuals and attack Hindu, Christian and Buddhist places of worship in Malaysia”. He did not give any details about who the high-profile individuals were. Police also seized six improvised explosive devices, a pistol and 15 bullets, he said. The planned attacks were to avenge the high-profile death of a Muslim fireman during riots at an Indian temple outside Kuala Lumpur last year, police said.

One of the Rohingya admitted supporting the Arakan Rohingya Salvation Army, a militant group blamed for attacks in Myanmar that sparked an army crackdown, and had also planned to target the Myanmar embassy in Kuala Lumpur, police said. The second Rohingya was a 25-year-old labourer who admitted to being militant with ties to IS, police said. The Rohingya are a Muslim minority that have long faced persecution in their Buddhist homeland.

Police are hunting for three more members of the suspected terror cell who allegedly planned to attack entertainment outlets. Authorities in Muslim-majority Malaysia regularly announce IS-related arrests but it is rare for police to seize explosives or weapons. Malaysia has not seen any notable terror attacks in recent years.

But security forces are on alert for militants from Malaysia and other parts of the region heading to the country after IS lost the last of its territory in the Middle East. Authorities say scores of Malaysian radicals flocked to fight with the jihadists in Iraq and Syria.