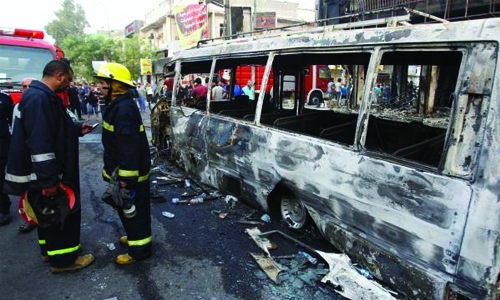 Baghdad : A suicide car bombing claimed by the Islamic State group killed at least 75 people in a Baghdad shopping district in the early hours of Sunday, the deadliest single attack in the capital this year.

The blast, which ripped through a street in the Karrada area where many people go to shop ahead of the holiday marking the end of the Muslim fasting month of Ramadan, came after IS lost one of the last two cities it held in the country.

The attack set buildings in the area ablaze, reducing some to charred hulks and also torching shops.

Men carried the bodies of two victims out of one burned building and a crowd of people looked on from the rubble-filled street as firefighters worked at the site.

IS issued a statement claiming the suicide car bombing, saying it was carried out by an Iraqi as part of the group's "ongoing security operations".

The jihadist group said the bombing targeted members of Iraq's Shiite Muslim majority, whom it considers heretics and frequently attacks in Baghdad and elsewhere.

Bombings in the capital have decreased since IS overran large areas north and west of Baghdad in June 2014, apparently because the jihadists were occupied with operations elsewhere.

But the group has struck back against Iraqi civilians after suffering military setbacks, both as a means of revenge and to portray itself as being on the offensive.

In May, the capital was rocked by a series of blasts that killed more than 150 people in seven days.

The latest bombing came a week after Iraqi forces completely recaptured Fallujah, a city 50 kilometres (30 miles) west of Baghdad, from the jihadists.

Anti-government fighters seized Fallujah in early 2014 and it later became one of IS's main strongholds in the country.

Iraqi forces launched an operation in May to recapture the city, one of only two in the country still held by IS.

The defeat was compounded by a devastating series of air strikes targeting jihadist forces as they sought to flee the Fallujah area.

Iraqi and US-led coalition aircraft destroyed hundreds of IS vehicles and killed dozens of fighters in two days of strikes against jihadist convoys after the end of the fighting, officials said.

With Fallujah retaken, Iraqi forces are now setting their sights on second city Mosul, the last major population centre held by IS in Iraq.