When science met spirituality | THE DAILY TRIBUNE | KINGDOM OF BAHRAIN 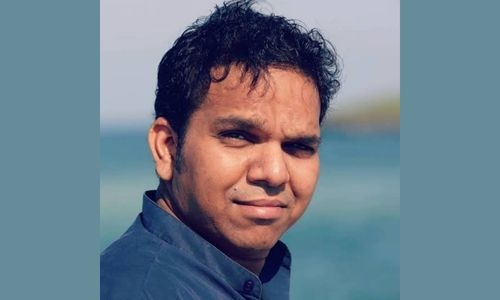 When the British were forced to leave their “crown jewel”, India they had already done their best to siphon the once richest nation of its wealth, culture, unity and even self-worth. 200 years of British Raj had reduced India's share in World Income from 35% to mere 2%, had left the nation of Vedic knowledge to a literacy rate of merely 12% and reduced most of our traditional craft and technology to rubble and condemned its people to cycles of hunger, disease and poverty.

An arbitrary partition of India by Cyrill Radcliffe, a man who had never visited India, left 15 million as shelterless shifting countries, of which 2 million would perish. Never before in human history an exodus of this many, in such a short time with such fatal consequences had ever occurred. Two years ago, 87,000 Indian soldiers had died fighting for “His Majesty” in the Second World War, and the British repaid this service with their final and most brutal chapter in a saga of atrocity.

But what the British could not break is India’s grit and determination to stand up tall as a nation. A decade after being reborn as a nation, despite all its struggles, India set its eyes on a unique dream - Space.

In 1962, Indian National Committee for Space Research (INCOSPAR) was set up by the Government of India in 1962 under the visionary leadership of Dr. Vikram Sarabhai.  That journey would lead to the birth of ISRO in 1969 - the same organization which is the pride of India and reached the moon and mars at the lowest possible cost and amongst the highest success rates.

As India celebrates its 75th anniversary of independence, it is worth noting some of the lesser known early milestones of our journey into space and the people who made it possible for us to achieve what we have.

It was during early 1960s, the founder of Indian Space Research Programme Prof Vikram Ambalal Sarabhai with his team which included a young scientist Dr. APJ Abdul Kalam, had located a place technically most suited for space research after considering many alternatives.  The place is called Thumba in Kerala. It was selected for space research as it was near the magnetic equator, ideally suited for ionospheric research in the upper atmosphere.

The major challenge for Dr. Sarabhai was to get the place in that specific area. Prof. Vikram Sarabhai approached the recently formed Kerala Government first.

After seeing the profile of the area, the view expressed by the bureaucracy was grim as thousands of fishing folks lived there. And there was more trouble.

The place Dr. Sarabhai wanted for the Space Launch Station, also had an ancient St Mary Magdalene Church, Bishop’s House and an associated school. This made the acquisition of this land a very difficult challenge, even from a political angle.

But Dr. Sarabhai was not amongst the ones who gave up without a tough fight. Someone suggested to him to approach the only person who could help. That was Reverend Father Peter Bernard Pereira who was Bishop of the area and worked in the Magdalene Church.

Dr. Sarabhai approached the Bishop on a Saturday evening. The meeting between the two turned out to be historical. Rev Father exclaimed, “Dear Vikram, you are asking to take over my children's abode, my abode and God’s abode. How is it possible?”

His next words changed the nation’s future.  He said, “Dear children, here is a scientist and his team. His name is Vikram Sarabhai.  What do sciences do? All of us experience, including this church, the light from electricity. I am able to talk to you through the mike which is made possible by technology. The diagnosis and treatment to patients by doctors comes from medical sciences. Science through technology enhances the comfort and quality of human life.  What do I do, as a preacher? I pray for you, for your well being, for your peace. In short, what Vikram is doing and what I am doing are the same - both science and spirituality seek the Almighty’s blessings for human prosperity in body and mind. Dear Children, Vikram says, he would build within a year, near the sea-coast, alternative facilities to what we are having. Now dear children, can we give your abode, can we give my abode, can we give God's abode for a great scientific mission?”

There was a total silence, a pin drop silence. Then all of them, as Dr. Kalam would later recall, got up and said ‘Amen’ which made the whole church reverberate. Those fisherfolk and Father Pereira had just played a crucial role in India’s quest to space.

That church that would later become the design center, where scientists started rocket assembly. The Bishop’s house was the assembly station for rocket parts. Later the Thumba Equatorial Rocket Launching Station (TERLS) led to the establishment of Vikram Sarabhai Space Centre (VSSC) and the space activities transformed into multiple space centers throughout the country. Even today, it remains one of the primary space research facilities of ISRO.

On the 75th anniversary of our independence we must remember this unique confluence of science and spirituality which happened six decades ago; when an institutional builder from Gujarat, accompanied by a young scientist and future President from Tamil Nadu worked with a spiritual leader from Kerala so that they could together take their nation into ultimate frontier of human endeavor - space. This is the spirit of India, the secret of our success.

(Srijan Pal Singh is the Founder of Homi Lab and The Kalam Centre. He was formerly adviser to Dr APJ Abdul Kalam. )