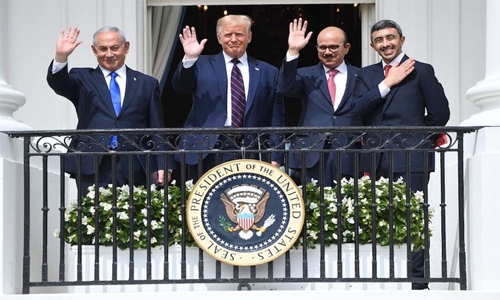 The visit two weeks ago by an Israeli delegation, led by their National Security Advisor Meir Ben Shabbat, accompanied by US Treasury Secretary Steve Mnuchin, was the latest step in the building of diplomatic relations between the two countries.

The phrase “historic moment” is overused in international relations, but the Abraham Accords, cemented with the signing ceremony at the White House between Bahrain, UAE and Israel last month was just that. It brought to an end years of enmity and suspicion, paving the way for a new relationship between the Gulf and Israel, Arabs and Israelis and, importantly, Muslims and Jews.

First, our shared history. We are, after all, the children of Abraham, with some shared history. For the best part of 1,000 years, Jews and Muslims lived peacefully alongside each other. Mohammed included Jews as part of the umma he declared in Medina in 622. The second Caliph, Omar, brought Jews back to Jerusalem in 636 after centuries of expulsion. The Middle Ages saw the relationship between Muslims and Jews flourish in Spain. This so-called “Golden Age” in that country is ev- ident today through the remains of the stunning mosques and synagogues built at the time. The great Jewish figure Maimonides, who was born in Spain in 1135, was close to Islamic leaders and philosophers. After moving to Egypt, was appointed a doctor to the royal court, a reflection of the high esteem in which he was held.

In more recent times, Jews lived across many of the Arab countries of the Middle East practicing their religion. Bahrain itself had the largest Jewish community of GCC countries. It once numbered 1,500 and the main influx was from Iran, Iraq and also India in the late nineteenth century. When I visited Bahrain four years ago, one of the remaining community leaders told me that modern Bahrain is proud of its Jewish community. He pointed to Houda Nonoo, a member of a prominent Bahraini Jewish family, who served as her country’s Ambassador in Washington. She, thereby, became the first Jewish person to be an ambassador of an Arab country.

Muslims and Jews also lived harmoniously together in other countries. My own ancestors in India, who belonged to the Jewish community in Kolkata had Muslim friends and neighbours. Their synagogue was even looked after by a Muslim caretaker. In the most painful chapter of Jewish history, the Holocaust, it’s worth remembering that heroic Muslims in countries such as France, Turkey, Morocco and the Balkans sheltered Jews.

The second reason to be optimistic is the shared community experience between Muslims and Jews. I have sat in a room as Imams and Rabbis have got to know each other, and seen the chemistry build between the groups. They have bonded over the similarity in praying several times a day, the religious obligation to fast or give charity, and any number of concepts we share. On a visit to the Gulf a few years ago, I recall that an alarm went off in a meeting, and the Muslims explained that this was their reminder for afternoon prayers. The Jewish attendees at that meeting did not find this strange at all, since they were familiar with this ritual from their own religion.

The two communities in Britain have worked together on freedom of religion and worship. The current Chief Rabbi has quipped that Ramadan is now a significant month in his diary, because of all the multi-faith Iftars he is invited to. In Britain, and elsewhere in Europe and beyond, the two communities have worked together on issues, such as circumcision and Halal / Kosher food, as well as the threat of the extreme right.

A third reason to draw hope is through our respective theologies. Granted theology is a complicated and contested area. There are some challenging passages in our holy books. Literal interpretations have led to violence. But we can draw on inspiring ideas in our scriptures, which moved us towards peace and coexistence. It was noticeable at the White House signing ceremony that, early in his remarks, UAE Foreign Minister His Highness Sheikh Abdullah bin Zayed bin Sultan Al Nahya quoted from scripture: “O God, you are peace and from you is peace.” In a similar vein, Prime Minister Benjamin Netanyahu quoted from Kind David’s Psalms: “May God give strength to his people, may God bless his people with peace.”

In making these points, we need to be honest that the contemporary relationship between the two communities is a mixed picture. Whilst there is friendship and cooperation, there is also prejudice and suspicion. But there is hope. A research study from 2017 showed that the more people know Muslims, Jews or people from other religious groups, the more likely they is to view them favourably.

This “contact theory” should encourage efforts to step up inter-faith relations. But the goal of this engagement is not to eradicate our differences and conflate our two faiths. An honest relationship recognizes our distinctiveness too and the areas of disagreement. But as a leading British scholar, Sheikh Zaki Badawi would say, “If we don’t talk, we fight.” Similarly, the great Rabbi, Abraham Joshua Heschel, said: “No Religion is an Island. We must choose between interfaith and internihilism.”

The Abraham Accords are a new chapter between nations but also two of the world’s great religions. The leaders of the countries have shown bravery and vision. Sudan has followed the example, becoming the latest Arab country to normalise relations with Israel, with the promise of more to follow. The UAE’s plans for Abrahamic Family House, encompassing a mosque, synagogue as well as a church, in Abu Dhabi offer an exciting vision of a future living side-by-side. In the new dawn of political and economic ties, we all have a responsibility to build better relations between our peoples through faith.

(The author is an inter-faith consultant, and advises leaders/family offices on their communications and philanthropy.)

Hamilton wins at Imola to secure record for Mercedes