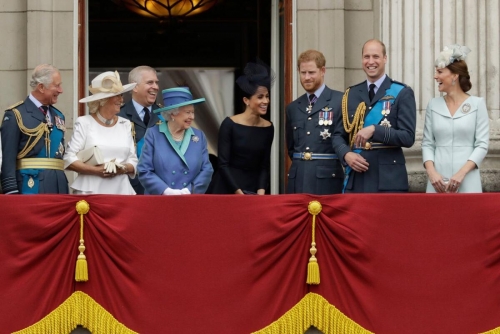 Prince Harry slammed the media's "feeding frenzy" over his relationship with Meghan in an explosive Netflix docuseries released on Thursday, and criticised Britain's royal family for failing to protect her and his mother Diana.

The royal family has been braced for the first three episodes of the six-part series "Harry & Meghan".

While it was largely spared during the first episodes, it was still on the end of accusations of "unconscious" racial bias and that it did not help Meghan, or Diana after her 1992 separation from Harry's father Charles — who is now king.

"To see another woman in my life who I love go through this feeding frenzy, that's hard," said Harry.

"It is basically the hunter versus the prey."

"The moment that she divorced, the moment she left the institution, then she was by herself ... she was completely exposed to this."

Meghan also took aim at the family for failing to counter negative press reports about her.

"It was horrible, but I continued to hold the line, like say nothing," she said.

Her husband said the family often ignored racist undertones in the reports.

"As far as a lot of the family were concerned, everything that she was being put through, they'd been put through as well. So it was almost like a rite of passage," he said.

"I said the difference here is the race element."

Harry went on to claim there was a "huge level of unconscious bias" within the family, and the documentary referenced a racist brooch worn by Princess Michael of Kent to an event that Meghan attended in 2017.

Harry reiterated feeling "ashamed" about being photographed wearing a Nazi uniform to a fancy-dress party in 2005, calling it "probably one of the biggest mistakes of my life".

The documentary, in general, lifts the lid on events that prompted the pair to quit royal life and move to the United States in 2020.

Several British newspapers claimed that the couple had declared "war" on the royal family, and that no family members had been approached to comment for the docuseries.

The first parts trace the couple's budding love story and their attempts to keep it a secret.

"When I got to meet 'M', I was terrified of her being driven away by the media — the same media that had driven so many other people away from me," said Harry.

"I knew that the only way that this could possibly work is by keeping it quiet for as long as possible."

He describes how he found refuge in frequent trips to Africa.

"I have a second family out there; a group of friends that literally brought me up," he said.

In what appeared to be a dig at his older brother Prince William and wife Catherine, he said:

"With many people in the family, especially the men, there can be a temptation or an urge to marry someone who would fit in the mould."

The final three parts are due to be released on December 15.

Royal fans outside Buckingham Palace were divided on the need for Harry and Meghan to make the series.

"It's just not the right thing to do," said Mary Rose, 68, from Worksop in northeast England.

"He [Harry] was so close to his brother at one time, and now he's alienated himself from his family."

However, Fflur Jones, a 26-year-old nurse from Wales, said: "I think they're really brave for what they've done."

"Speaking out — especially against family — is really difficult. So fair play to them for doing that."

In the central English city of Nottingham, the first place Harry and Meghan visited as a royal couple in 2017, Alex Smith, 29, was also not impressed with their stance, blaming "headstrong" Meghan.

Netflix showcased the first trailer last week, as William made his first trip to the United States as heir to the throne, prompting accusations of sabotage.

The timing could barely have been worse for William after Buckingham Palace sacked one of his godmothers as a courtier for using racially charged language to a black British woman during a reception.

For some, the incident reinforced incendiary claims by mixed-race Meghan, 41, that racism within the royal household was one of the reasons for leaving.

The docuseries airs three months since the death of Harry's grandmother Queen Elizabeth II, and a month before the long-awaited publication of his memoirs, titled Spare.

Pope Francis weeps as he speaks of 'tormented' Ukraine