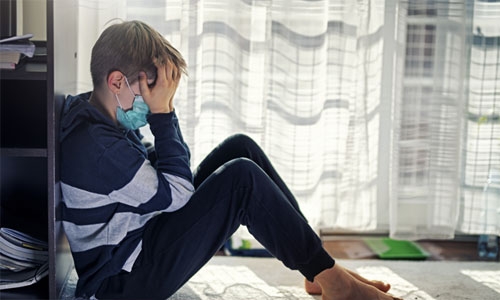 The coronavirus (COVID-19) pandemic has been stressful, overwhelming and caused strong emotions in adults and children. Fears about the virus can take an emotional toll, especially if one is already living with an anxiety disorder.

For many people, the uncertainty surrounding coronavirus is the hardest thing to handle.

And that makes it all too easy to fall into overwhelming dread and panic. However, the reality is that anxiety can affect just about anyone for any number of reasons with or without the pandemic.

In fact, the World Health Organization (WHO) has estimated about 300 million people around the world suffer from this mental and psychological problem.

Feeling down or having the blues now and then is normal. And everyone feels anxious from time to time — it’s a normal response to stressful situations.

But severe or ongoing feelings of anxiety can be a sign of an underlying mental health disorder. Anxiety may occur as a symptom of clinical depression.

It’s also common to have depression that is triggered by an anxiety disorder, such as generalised anxiety disorder, panic disorder or separation anxiety disorder. Anxiety is what we feel when we are worried, tense or afraid – particularly about things that are about to happen, or which we think could happen in the future. It is a natural human response when we perceive that we are under threat. It can be experienced through our thoughts, feelings and physical sensations.

Suicide not an option

Severe anxiety disorder can lead to a person committing suicide. Even the WHO has recognised suicide as a growing global problem particularly during this pandemic.

Conservative estimate by the world body indicates that every year close to 800,000 people take their own life – suicide occurs every 40 seconds – and there are many more people who attempt suicide in many countries. In fact, experts believe mental health issues and suicidal ideation are rising as the pandemic continues.

However, the availability and quality of data globally on suicide and suicide attempts are very poor. Given the sensitivity of suicide – and the illegality of suicidal behaviour in some countries – it is likely that under-reporting and misclassification are greater problems for suicide than for most other causes of death.

In Bahrain, for instance, there have been many reported cases of suicides in recent years. During the first six months of 2020, Bahrain was ranked fifth in suicide rates among Arab nations by the German Media Website, “Deutsche Welle”. Nearly 13 suicides were officially reported since the beginning of 2019 in the Kingdom.

A year before, according to the WHO data, suicide deaths in Bahrain reached 85 or 3.36% of total deaths. The bottom line is that suicide is one of the leading causes of unnatural death in the Kingdom. Suicide is not an option to solve the problem of anxiety. It is, in fact, the worst option of all. Suicide is a permanent solution to – most of the time – a temporary problem.