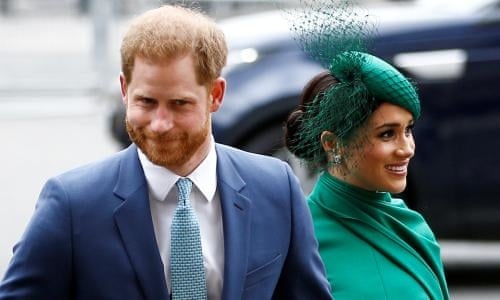 UK public turn against Meghan and Harry after racism claims

Prince Harry and his mixed-race wife Meghan’s popularity has fallen sharply in Britain after their explosive interview accusing the royal family of racism, a poll suggested Friday.

More than 11 million people in Britain and 50 million in the United States watched the couple claim that an unnamed royal had asked how dark their baby’s skin would be.

The allegations, which the royal family said would be investigated, have plunged the monarchy into its biggest crisis since the death of Harry’s mother, Princess Diana, in 1997.

But the controversy has also polarised opinion on both sides of the Atlantic.

A YouGov poll said Harry’s popularity rating has fallen to 44 per cent and for the first time, a larger proportion of British people view him negatively (48 per cent).

In a poll early this month, in anticipation of the interview, 53 per cent of the public said they viewed him positively.

Meghan already had a net negative rating, which has now risen to 58 per cent from 53 per cent, but only three in 10 (31 per cent) view her positively, down from 38 per cent.

The couple’s popularity has gradually fallen since their 2018 wedding, according to YouGov, as they reportedly fell out with Harry’s brother Prince William and his wife Kate, and announced they were stepping away from royal duties.

The couple split the generations, with strong support from young people in Britain. Among 18-24 year-olds, 55 per cent like Meghan and 59 per cent like Harry.

Those over 65 overwhelmingly dislike both — 69 per cent view, Harry, negatively, while the figure for Meghan is 83 per cent.

The poll found the interview also hit Prince Charles’s popularity. He has not commented after Harry said that his father at one point stopped taking his calls and complained his family “literally cut me off financially”.

Charles is now viewed favourably by 49 per cent of British people, down from 57 per cent.

Most royals have not seen their popularity affected, the poll found. Queen Elizabeth II has a popularity rating of 80 per cent.

The 94-year-old monarch said in a statement that she was saddened at hearing of the couple’s unhappiness. She called the racism claim “concerning”, although suggested that “some recollections may vary”.

The results contrast with a US poll by Morning Consult which found the Oprah interview boosted the couple’s popularity thereby more than 20 percentage points, with 69 per cent now taking a favourable view of Harry and 67 per cent of Meghan.

Biden vows independence from Covid-19 by Fourth of July

AstraZeneca vaccine is safe: WHO