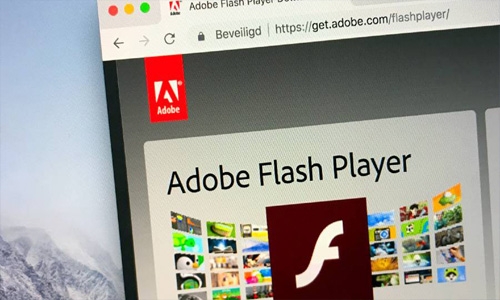 Software major Adobe has bid goodbye to its iconic Flash Player as major internet browsers shut it down on Friday and Microsoft blocked it in most versions of Windows.

Adobe had earlier said to stop supporting Flash on December 31 and block Flash content from running on January 12.

First announced in July 2017, Adobe had said to stop updating and distributing Flash Player after December 31, 2020 due to the diminished usage of the technology and the availability of better, more secure options such as HTML5, WebGL and WebAssembly.

Microsoft has announced to end support for Adobe Flash Player on Microsoft Edge and Internet Explorer 11 at the end of the year.

According to media reports, the Internet Archive is preserving Flash games and animations, including hits like "Peanut Butter Jelly Time."

"We want to take a moment to thank all of our customers and developers who have used and created amazing Flash Player content over the last two decades," Adobe said in an update last month.

"We are proud that Flash had a crucial role in evolving web content across animation, interactivity, audio, and video. We are excited to help lead the next era of digital experiences".

Adobe had recommended all users to immediately uninstall Flash Player to help protect their systems.