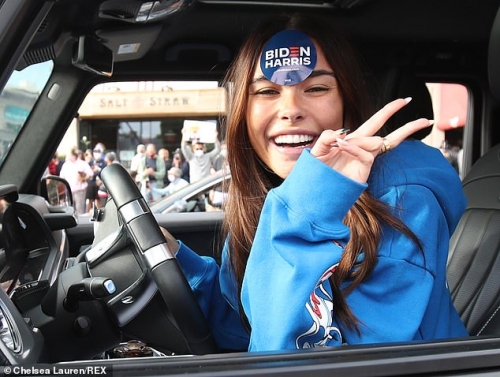 Congratulatory posts have been pouring in over the last several hours for US President-elect Joe Biden and his running mate Kamala Harris, who is set to become the first female Vice President of America. "Crying and holding my daughter, "look baby, she looks like us," tweeted actress Mindy Kaling, referring to Kamala Harris. Many of the congratulatory messages were in fact for Harris, for breaking the glass ceiling and becoming the first woman to become US Vice President.

Julia Louis-Dreyfus, famous for her role of the Vice President of the United States in the popular series, "Veep", shared: "Madam Vice President" is no longer a fictional character." "What a tremendous moment in our nation's history!" tweeted Hollywood star Reese Witherspoon, and added: "Congrats to our new President @JoeBiden and the First Female Vice President in our history @KamalaHarris."

Talk show host Lilly Singh wrote: "BALLE BALLE AUNTY JI!!! @KamalaHarris congratulations on a historic win!! Time to drop that secret celebratory video I've been holding onto!" Singer Alicia Keys posted: "Not a crier but I lowkey shed a tear, we won't let hate win! When we show up for each other we win! There's SO much work to be done but I believe we are willing to show up for each other! Let's keep being loud & strong. Now the real work begins! Big congrats to @KamalaHarris." 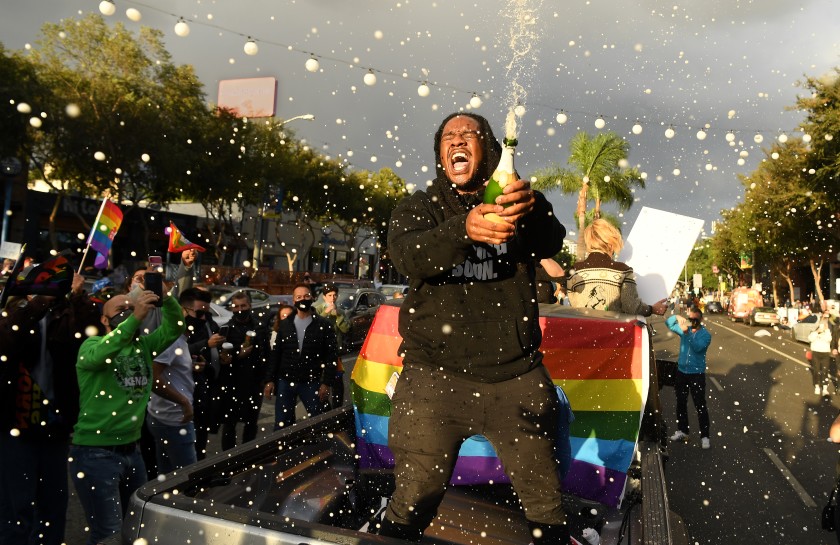 Singer Miley Cyrus wrote: "Now THIS is a PARTY IN THE USA! @JoeBiden @KamalaHarris." Actress-filmmaker Elizabeth Banks wrote: "I'm so soso relieved. Congrats @JoeBiden I am crying at the thought of @KamalaHarris as Vice President of the United States - wow wowwow."

"Madam Vice President! I'm weeping!" wrote Jesse Tyler Ferguson. "My VP is a black woman!" wrote Keke Palmer. In a separate tweet, she added: "I'm so inspired and truly astonished to look and see a black woman in this position. I say BLACK because representation MATTERS! In America I have searched over and over again as a black girl for people in positions of power that look like me!"

"HERSTORY," wrote "Orange Is The New Black" star UzoAduba. Actor-comedian Henry Winkler stated: "We will now have A Vice President and First Lady to be really proud of." "This is a good day for the country we love. Congratulations to @JoeBiden and @KamalaHarris and thanks to the lifelong Republicans whose conscience would not permit this to go on. May God bless America," said Jimmy Kimmel. "America! We have given ourselves an opportunity for a reset. Let's get to work!" wrote actress Jada Pinkett Smith.

Actress Kerry Washington shared: "The people have spoken! Thank you to everyone who used your vote and your voice to make history. PRESIDENT Joe Biden and VICE PRESIDENT Kamala Harris." "Our 46th president, @joebiden !!!! I've been waiting to post this photo because I knew deep down you would be our next President. Today we celebrate the millions of Americans who overcame barriers to the ballot box, mobilized their communities and voted in record-breaking numbers. This was OUR election and WE WON TOGETHER. There's still a lot of work to be done, but today we will celebrate each other," wrote singer Demi Lovato. Several celebrities took on Donald Trump for claiming he had actually won the election "by a lot". "No honey. You lost. By a lot," wrote comedian Chelsea Handler, in raction to Trump's tweet.

"My god it feels like I just took off a weighted blanket, unhooked my bra and taken out my extensions all at once," quipped model ChrissyTeigen. Singer Lizzo commented: "Let's get to work, America. It's time to hold the people in charge accountable. It's time for them to listen. And it's time for actual change in our policies and practices."

Bahraini girls among the ‘heaviest in the world’