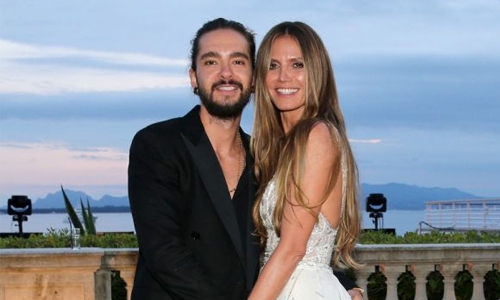 The model and former Project Runway host, 46, and Kaulitz, the 29-yearold guitarist for German band Tokio Hotel, swapped vows in February, according to multiple reports. This is the third marriage for Klum, who was previously married to stylist Ric Pipino, from 1997 to 2002, then married singer Seal three years later.

The high-profile couple of Klum and Seal famously renewed their wedding vows each year on their anniversary and, at one point, even announced plans for a reality show on Lifetime called Love’s Divine, where they would offer inspiration to other couples. The show never aired, and they announced their split in January 2012, although they continue to co-parent their four children.

Afterward, Klum dated her bodyguard, Martin Kirsten, and Vito Schnabel, an art dealer. She and Kaulitz were first spotted together in early 2018, and they made their official debut as a couple at the Cannes amfAR Gala in May 2018.

Klum and Kaulitz, who was previously married to Ria Sommerfield from 2015 to 2018, announced their engagement in December. Kaulitz asked Klum’s kids — Leni, 15; Henry, 14; Johan, 12; and Lou, 10 — for her hand in marriage before proposing.

Hiring me is always a risk: Awkwafina