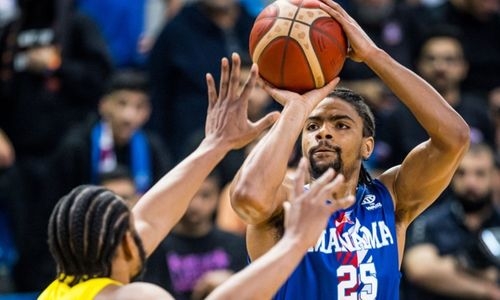 The contest was Manama’s fourth in Group B of the WASL’s Gulf sub-zone, and the Bahrainis improved to a 3-1 win-loss record.

After leading 24-19 at the end of the first quarter, Manama stretched their advantage with a 30-point second period and headed into the half up 54-41.

They continued their strong play after the break, enjoying leads as big as their final 31-point winning margin en route to the final buzzer.

Garcia had 18 points and seven rebounds, while Lamonte Ulmer contributed 16 and 12 boards.

Hasan Nowrooz chipped in with 13 markers, while Mustafa Hussain and Elijah Robinson each scored 12 and Ahmed Salman finished with 10.

They received little help from the rest of their squad.

The Saudis were handed their fourth loss as they remained winless so far in the competition.

Manama return to the hardwood for their final two games of this round in March.

They first travel to Kuwait City to face Kuwait Club on 13 March, and then will be back home to take on Al Sadd of Qatar on 21 March.

Kuwait and Sadd are scheduled to face off tonight in Doha.

Manama are one of 16 teams in the inaugural WASL. The competition has been divided into two sub-zones, the Gulf and West Asia, comprising eight teams each. Each sub-zone is further divided into two groups.

Group A of the Gulf subzone features Al Hilal of Saudi, Shabab Al Ahli of the UAE, Al Basheer Club of Oman and Kazma SC of Kuwait.

In the West Asia sub-zone, Beirut First Club of Lebanon, Ittihad Ahli of Syria, Orthodox Ramallah of Palestine and Zobahan Isfahan BC of Iran are in Group A; and Shahrdari Gorgan of Iran, Al Naft SC of Iraq, Al Karamah SC of Syria and Al Riyadi Beirut of Lebanon make up Group B. Each team plays the other home-and-away.

The top team from each group will then advance to the semi-finals, while the second and third will faceoff in a qualification to the last four.

Eventually, the top three teams from the Gulf and West Asia sub-zones will qualify for the WASL Final 8, where they will be joined by Champions of South Asia and Central Asia.