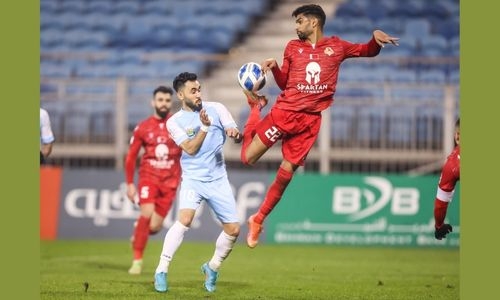 Al Khayyat headed home in fifth minute of second-half stoppage time off a free-kick from fellow-substitute Hassan Al Karani, who had just come on moments before.

The goal stunned their rivals and it was enough to separate the two sides in a tightly contested and physical affair.

The result earned East Riffa only their second win in 10 matches in this year’s league, as they stayed in the bottom-half of the table.

Riffa were handed their fourth loss but they remained in the top four. Following a goalless first half, a majority of the best chances from both sides came late in the game.

In the 64th minute, Nigerian Ogenyi Eddy Onazi came close for East Riffa with a long-distance effort that was parried by Riffa goalkeeper Abdulkarim Al Fardan.

Mohammed Jassim Marhoon then had a chance for Riffa heading into the final 10 minutes of regular time. His free-kick from the left was on target but punched away by East Riffa’s Eyad Nasser.

Brazilian Flavio Silva Cheversan had a fine opportunity in the 81st minute for East Riffa but his header in the face of goal was just off target.

Riffa’s Mohammed Al Romaihi also came close with a header in the 89th minute, but he could not convert against his former team.

In other matches yesterday, Al Hala and Sitra were both victorious.

Hala claimed only their second win in 10 matches as they improved to 12 points, while Shabab suffered their seventh loss and stayed on seven markers.

In Sitra’s victory, Othman Hajj put the winners ahead with a penalty in the 43rd minute after the ball was handled in the area.

Budaiya levelled the scores in the 66th minute with a fine equaliser from Brazilian Ricardo Verza De Souza, who scored with a curling left-footed effort from the outer edge of the penalty box.

But just three minutes later, Sitra got their winner through Mishal Al Shammari, who tapped the ball in from close range off a low cross from the left.

Sitra posted their fourth win and they rose to 16 points on the table, while Budaiya stayed in last place with just two points following their eighth loss.

League action continues tonight with another three matches on schedule.

At 5.45pm, longtime rivals Muharraq and Al Ahli square off, while at 6pm Manama take on Al Khaldiya.

At 8.45pm, Hidd play Bahrain Club in the late fixture.

This week’s action marks the 10th week of play in the league, and it followed a long break to allow for Bahrain’s internationals to compete in the 25th Arab Gulf Cup in Basra, Iraq, where the nationals made the semi-finals.