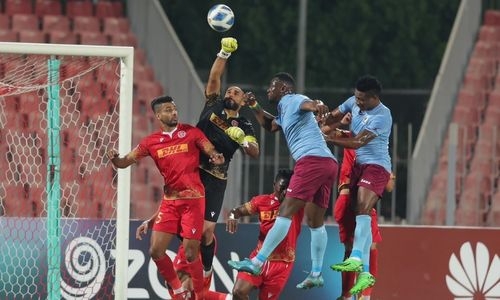 Muharraq edged past Al Shabab 2-1 while Riffa salvaged a late 1-1 draw with Sitra last night in the fourth week of action of the 2022/2023 Nasser bin Hamad Bahrain Premier Football League.

Amine Benadi and Mario Fontanella were on target on either side of half-time in Muharraq’s victory, while Komail Al Aswad scored in the very last minute of second-half stoppage time to come away with a stalemate against Sitra.

Both games were played at different venues yesterday.

In Muharraq’s win, Shabab were the first to get onto the score sheet with a goal in the 22nd minute through Ahmed Khouri.

But Muharraq were able to equalise in the 41st minute through Benadi, who headed home from close range off a corner-kick. That was enough to send the match level into the half-time break.

In the second half, Fontanella fired home in the 65th minute from the face of goal, and that proved to be enough in the end, giving his team the full three points.

Muharraq went to 10 markers from four matches following their third win, to go with one draw.

Shabab, on the other hand, suffered their second loss and stayed on six points on the league standings.

Meanwhile, in Riffa’s contest, Sitra took the lead in the 12th minute when Othmn Hajj scored from inside the penalty area.

Riffa tried hard to level the scores, but it appeared that Sitra were going to come away with a win.

That was until the eighth and final minute of second-half stoppage time, when Riffa were able to find an equaliser through star midfielde Al Aswad, who headed home off a cross from the right supplied by fellow-Bahrain international Jassim Al Shaikh.

Riffa came away with their first draw after four games in the new season, as they improved to seven points on the table.

Sitra played to their second deadlock and went to five points.

League action continues tomorrow with another two games on schedule, both kicking off at 6.30pm.

Al Khaldiya take on Al Hala and Manama face off with East Riffa.

Amazon to shut down fooddelivery business in India