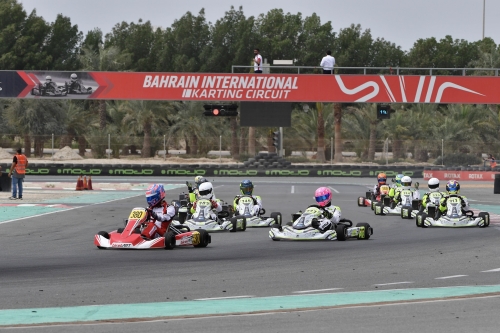 The SRMC will be holding its first of four rounds today and then round two will take place tomorrow. Competition will be held in five different categories, including the Micro MAX, Mini MAX, Junior MAX, Senior MAX and Senior Masters MAX.

Both meetings feature the same timetable, with Qualifying Practice kicking off the on-track action at 2.45pm. The Pre-finals will then be held from 3.30pm and then the Finals from 4.40pm.

The Micro and Mini classes will be taking to the track together for each session, while the Juniors will be running alone. The Seniors and the Senior Masters will also be on track at the same time for all the sessions.

The action will be followed by the podium ceremony, set for an estimated 5.25pm start. All the racing will take place along BIKC’s 1.414-kilomere CIKFIA Track. The SRMC is a top-class local series that will see the competitors line up on the grid in their very own Rotax-powered karts.

This campaign marks its second season as it builds on the momentum gained by the opening championship. Clinching the titles in their respective categories in 2021 were Fahad Almuqla in the Senior MAX class, Luca Houghton in the Junior MAX, Shaikh Rashid bin Salman Al Khalifa in the Mini MAX, Shaikh Ahmed bin Saqer Al Khalifa in the Micro MAX and Anthony Hogg in the DD2 MAX class.

Following the first two meetings this weekend, rounds three and four are also scheduled on back-to-back days on October 14 and 15. The fourth and final round will crown the all-new champions in the series.

The SRMC will then set the stage for the Bahrain Rotax MAX Challenge, which will flag off just a few weeks later in November with the first of eight rounds. The racing is being organised by BIKC in cooperation with BIC and the Bahrain Motor Federation.

All those interested in taking part in either or both championships are requested to contact BIKC on +973-17451745. More information can also be found on bahraingp.com or on the social media channels of BIKC and BIC.