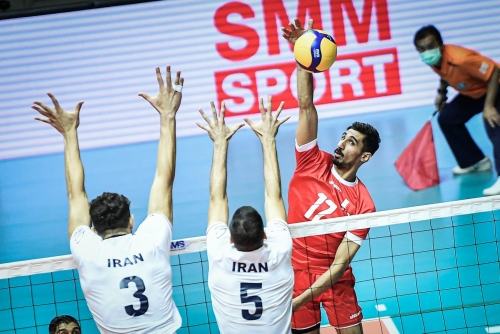 Bahrain posted a stunning 3-1 (25-16, 25-19, 22-25, 25-18) victory over Iran yesterday in the 2022 Asian Volleyball Confederation (AVC) Cup for Men, being held in Nakhon Pathom, Thailand. The nationals were the aggressors and took the opening two sets and had a chance to complete a clean sweep of the contest with the scores tied at 22-all in the third.

But the Iranians were able to make the necessary plays and extend the game to a fourth set. There, the Bahrainis took command and went ahead 10-6 before widening the gap to 20- 14. They rode their momentum to the end and soon closed out the victory.

The result earned Bahrain their first win in Pool F of the tournament’s main round and kept their hopes of advancing to the semi-finals alive. They must now win their final game against Pakistan today and hope Iran lose to group leaders China in the other contest.

“It was a very important step towards our aim of reaching the semi-finals,” said Bahrain head coach Issanaye Ramires from Brazil. “We used experience and good attacks to beat them. I’m very proud of my team. They followed the staff coaches’ instruction and plan.”

Outside hitter Mohamed Abdulla scored a match-high 21 points, including 15 attacks and two aces for Bahrain. Amir Mohammad Golzadeh led Iran with 16 points. Bahrain’s match with Pakistan today is scheduled for a 5am start, Bahrain time. China and Iran play next, at 8am, Bahrain time.

The other teams competing for a spot in the last four from Pool E are Japan, hosts Thailand, South Korea and Australia. Bahrain are making their debut in the AVC Cup for Men, which is in its seventh edition.