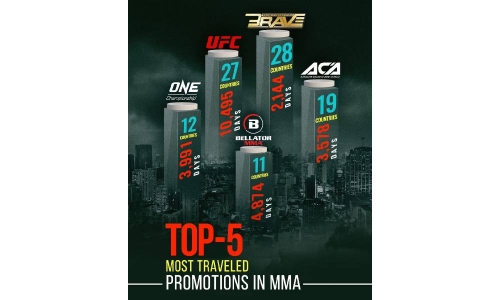 A brand synonymous with breaking records and barriers, BRAVE Combat Federation officially became the most global mixed martial arts organization in the history of the sport on August 6, when BRAVE CF 61 kicked off in Bonn, Germany.

With the addition of Germany to the host countries list, BRAVE CF has now traveled to 28 countries in less than six years, surpassing second-place UFC, which has hosted shows in 27 nations overall. Since September 23, 2016, with BRAVE CF 1, the fastest-growing MMA promotion in the world has gone around the globe, literally.

In just its first full year of operations, events were hosted in Bahrain, Brazil, United Arab Emirates, India, Kazakhstan, and Mexico. The number of countries was notably extended between 2017 and 2018, when BRAVE CF inaugurated its brand in Jordan, Indonesia, Northern Ireland, Morocco, and Colombia.

In its third year of operations, BRAVE CF rapidly picked up the pace, hosting shows in Pakistan, South Africa, Saudi Arabia, Philippines, and England. After that, the organization added Romania, Kyrgyzstan, Slovenia, and Sweden to the list, eventually crossing the 20-country barrier with a series of four shows hosted in Stockholm, in mid-2020 during the height of the COVID 19 global pandemic.

In 2021, BRAVE CF went back on the road to help empower mixed martial arts in Europe, hosting events in Russia, Belarus, Italy, Poland, Serbia. And then BRAVE kicked off 2022 with shows in new territories such as South Korea and Uzbekistan.

Then on August 6th, BRAVE Combat Federation reached a monster milestone in its six-year history, and has become the most-traveled organization in MMA. From BRAVE CF 1 to BRAVE CF 61, it took the promotion 2144 days to reach that landmark.

The accomplishment is all the more impressive given that the UFC needed 9452 days to get to 27 countries. Aside from the record-breaking at BRAVE CF 61, other milestones by the promotion include BRAVE CF being the only international MMA organization to host an event in Africa, as well as putting together the first international MMA show in several other nations.