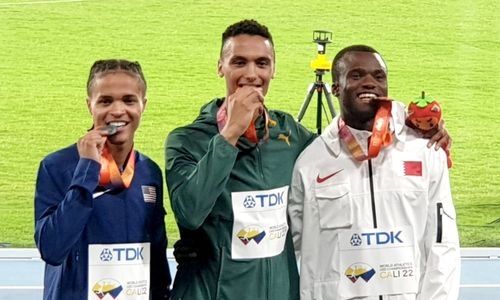 Bahrain’s Yusuf Ali Abbas captured the men’s 400 metres bronze medal early yesterday morning at the World Athletics U20 Championships being held in Cali, Colombia. Abbas was in the lead midway through the race but fell marginally behind as the field of seven made it down the final straight.

The 19-year-old still managed to do enough to the finish to claim third place and his place on the podium. Abbas had additional reason to celebrate at the end of the run, as he had also clocked a new personal best. Abbas’s bronze was the first and only medal won so far by Bahrain at this year’s world under-20s.

The national team had previously won two gold, three silver and seven bronze medals in past editions. The golds were claimed by Edidiong Odiong in the women’s 200m at the 2016 meeting in Bydgoszcz, Poland, and Ruth Jebet in the women’s 3,000m steeplechase in 2014 in Eugene, Oregon in the US.

Bahrain is one of 145 nations participating in this year’s under-20 worlds, which features more than 1,500 of the best up-and-coming young athletes from across the globe. Running on the inside lane, Abbas came charging out of the blocks and could quickly be seen gaining on his rivals to his right.

He continued to make a strong push but appeared to fade a bit as the competitors went round the final bend. Abbas was determined, however, and he put in a strong finishing stride to complete the race in 45.80 seconds—the fastest mark of his young career so far. The bronze medal was also his first major international accolade. Winning the gold was Lythe Pillay of South Africa in 45.28s, while marginally in front of Abbas was Steven McElroy of the US in 45.65s.

Tyler Floyd of Canada finished fourth in 46.01s, while Joshua Atkinson of Thailand was fifth in 46.31s and Shaemar Uter of Jamaica sixth in 46.36s. Busang Collen Kebinatshipi of Botswana and Delano Kennedy of Jamaica were both disqualified from the final classification, with Kennedy being shown a red card after a false start and not being able to compete in the race. Meanwhile, Bahrain have one last chance to go for another medal at this year’s under-20 worlds, when Hamse Dhabar competed in the men’s 3,000m steeplechase final early tomorrow morning at 1am, Bahrain time. The 18-year-old secured an automatic berth in the medal round after finishing third in the first of three first round heats on Wednesday.

To add to his ticket to the next stage, Dhabar posted a new personal best of eight minutes 51.25 seconds in the race. Dhabar’s time was the 10th fastest of the first round. He will be one of 15 athletes competing for the podium places in tomorrow’s final.