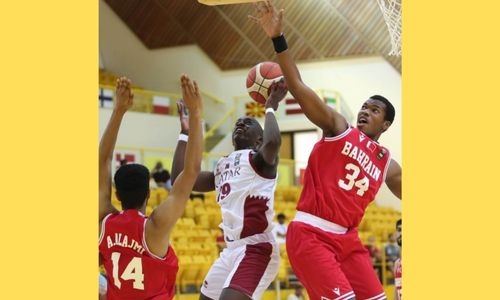 Bahrain bowed out of title contention yesterday in the FIBA Asia U18 Championship-Gulf Basketball Association (GBA) Qualifier in Dubai following a 48-85 loss to Qatar in their semi-final clash at the Al Wasl Club arena. The nationals fell behind 0-14 to start the game and needed nearly five minutes to get their first basket.

They trailed 7-27 at the end of the first quarter and never recovered, facing deficits as big as 39 points the rest of the way. With the result, the Bahrainis will have to settle for playing in the game for third place today, where they will take on the losers of the other final four contest between Saudi Arabia and Kuwait. Omran Abdulla Akbar was their lone player in double figures against the Qataris last night. He finished with 17 points and 10 rebounds.

Mahdi Ali Almusalli chipped in with eight, while Abbas Albasri and Ali Jawad Hasan had five points apiece. Mohammed Hashim Abbasher led five Qataris with 10 points or more after pouring in 28. He also had 14 rebounds in their big win. The game marked the fourth straight loss for Bahrain in the competition.

They had opened with resounding back-to-back victories over hosts UAE and Oman, but could not keep up their winning ways and lost to the Qataris, Kuwait and Saudi to end their preliminary round campaign.

That set the stage for their semis match-up with Qatar yesterday. The regional tournament is also being played to determine the GBA teams that will compete in the FIBA U18 Asian Championship 2022, which will take place in Tehran from August 21 to 28. Qatar have qualified as only the two finalists will book their tickets to the continental showcase.