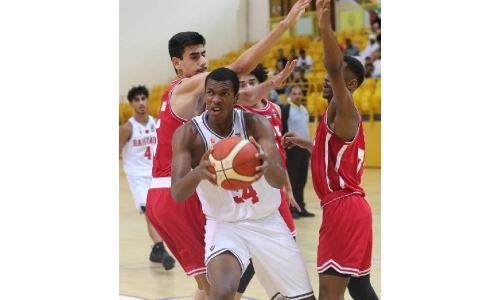 Bahrain outclassed hosts UAE 68-48 last night to make a winning start to their campaign in the FIBA Asia U18 Championship-Gulf Basketball Association (GBA) Qualifier, being held in Dubai.

The nationals got off to a strong start and took a 14-10 lead at the end of the first half, which they extended to 36-24 at the half. They maintained their fine form after the break, staying ahead 52-38 after three, before holding on in the final canto to close out the impressive 20-point victory. ‘

The Bahrainis led by as many as their final winning margin. Nasser Al Anzoor top scored for the nationals with 17 points. He also had nine rebounds. Ismaeel Alansari chipped in with 14, while Mohammed Ghazi Qambar had eight and Ali Jawad Hasan seven.

Abdulaziz Khalifa paced the Emiratis with 22 in the loss. Bahrain, coached by Mindaugas Janiska from Lithuania, are scheduled to return to the hardwood today against Oman. The game is scheduled to tip off at 3pm, Bahrain time.

All six GCC nations will be participating in the event, including Bahrain, Saudi Arabia, Oman, Kuwait, Qatar and hosts UAE. Following today’s fixture, the Bahrainis go up against Qatar tomorrow, also at 3pm, Bahrain, before having a day off on Monday.

Following the single round-robin, the top four teams will advance to the semi-finals on Friday next week, where the top seeds will face the fourth-ranked squad while the second seeds will play the third. The bronze and gold medal games will then take place the evening after.

Bahrain bow out of Arab Cup U-20