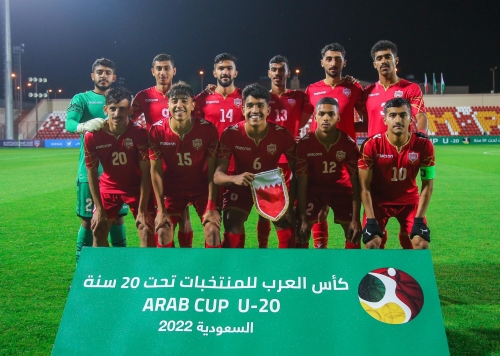 Bahrain bow out of Arab Cup U-20

Bahrain’s junior national football team missed out on a place in the quarter-finals of the Arab Cup U-20, which is taking place in Abha, Saudi Arabia. The Bahrainis needed to be among the six group winners or one of two best runners-up to march through to the round of eight, but did not make the cut.

After a loss against Tunisia and a win over Djibouti, the nationals were second in Group E behind the Tunisians, but Yemen from Group B and Palestine from Group F were the teams to advance.

The winners of the other divisions were hosts Saudi Arabia from Group A, Jordan from Group B, Algeria from Group C Egypt from Group D, and Morocco from Group F. In the quarters, which are scheduled to be held tomorrow, Saudi take on Yemen, Morocco face Egypt, Palestine go up against Jordan and Tunisia play Algeria.

The Arab Cup U-20 was part of Bahrain’s preparations for the qualifiers of the AFC U-20 Asian Cup 2023, which will be held this September 10 to 18. The nationals are in Group B of the qualification process, with the matches being held in the Kingdom.

Joining the nationals in this division are Bhutan, Qatar, Nepal and Bangladesh. There are 44 teams overall in the qualification competition. They have been divided into 10 groups. In each group, teams will play each other once at a centralised venue.

The 10 group winners and the five best runners-up will qualify for the final tournament. Group A is to be held in Saudi Arabia, Group C in Laos, Group D in Jordan, Group E in Mongolia, Group F in Indonesia, Group G in Oman, Group H in Iraq, Group I in Tajikistan and Group J in Kyrgyzstan.