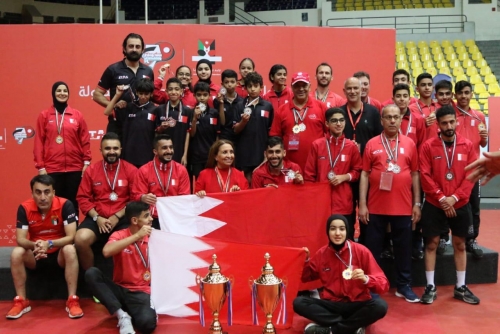 Bahrain added to their medal tally yesterday at the West Asian Table Tennis Championships in Amman, Jordan, after winning a gold and two silver medals on the third day of competition. Bahrain’s under-19 men’s team bagged the gold medal in their age-group, while the under-11 and under-15 boys’ teams came away with the silver medals.

Yesterday’s haul added to the gold and bronze medal claimed by the under-19 women’s team and the senior men’s side on Thursday, bringing the overall total so far to five medals including two gold, two silver and one bronze.

Bahrain Table Tennis Association president Shaikha Hayat bint Abdulaziz Al Khalifa congratulated the team on their success. Shaikha Hayat was present at the awarding of the medals for the winners.