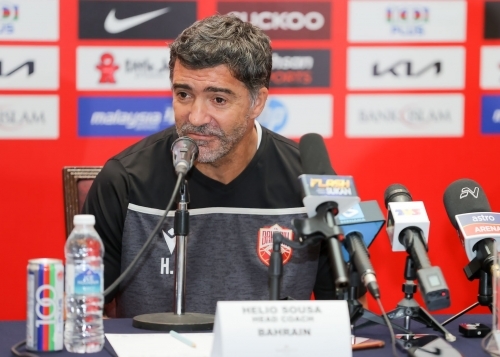 Bahrain head coach Helio Sousa thanked his players on the senior men’s national football team for a job well done in securing their berth at the AFC Asian Cup 2023. The nationals won all three of their qualifying matches held the past week-and-a-half in Kuala Lumpur, defeating Bangladesh 2-0 and edging past hosts Malaysia 2-1 before wrapping up their bid with a 1-0 triumph on Tuesday against Turkmenistan.

The Bahrainis thus finished in first place in qualification Group E and punched their tickets to next year’s continental showcase.

“We arrived here with the expectations of being the first team in our group, and that we must win all the games; the team delivered very well,” Sousa said in his post-match Press conference following their win over the Turkmen.

“The responsibility the team had of winning the three games and making the nine points was fantastic. “I am very happy; I am very grateful to the boys. This is now seven times Bahrain have qualified for Asian Cup, for me this is the first one. I am very happy to get this opportunity with them.”

Sousa particularly praised the national team for their ability to adjust to the unique circumstances they had to face in the Southeast Asian nation, such as heavy rain on match days and challenging pitch conditions.

Meanwhile, Bahrain striker Abdulla Yusuf was all smiles after scoring the winning goal against Turkmenistan from the penalty spot. He finished the three qualifying matches with two goals, and expressed his pride in the national team for their strong showing.

“It was great; [securing qualification] was what we came for,” Yusuf said. “I am happy for the team and for the coach. We played in some difficult conditions, but we took what is important—the three games and the nine points.”

Yusuf added that playing in such a competition was another learning experience for the squad. “It’s like with everything—the weather, the pitch, the type of team—all teams have a different style and we learned from that; we learned from these teams.

“We showed our quality, our style. We are still learning each game. “Our goal here, first, was to win, but with the winning we have to learn too from our mistakes and from our successes.” Bahrain were one of 11 nations to secure their Asian Cup berths from the third and final stage of qualifying.

From the six groups in this phase, all six winners and the five best runners-up made it through. The others to qualify were Jordan and Indonesia from Group A, Palestine from Group B, Uzbekistan and Thailand from Group C, India and Hong Kong from Group D, Malaysia behind Bahrain from Group E, and Tajikistan and Kyrgyzstan from Group F.

They joined the 13 who had already claimed their places from the second round of qualification, namely Japan, Syria, Qatar, South Korea, Australia, Iran, Saudi Arabia, the UAE, China, Iraq, Oman, Vietnam and Lebanon. All 24 teams will feature in next year’s Asian Cup, which will be played at a yet-to-bedetermined venue after China withdrew as hosts.