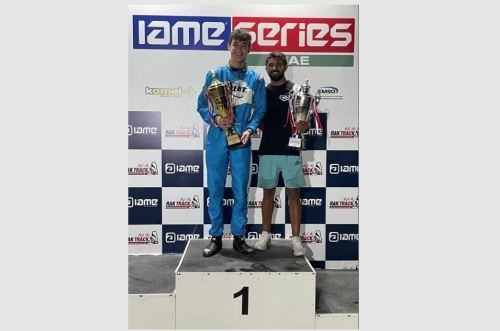 Lewis, sponsored by aviation industry giants JBT AeroTech Corporation, secured his crown with a sensational “grand slam” victory in the championship’s second and final round, where he led from the start in Qualifying Practice all the way to the chequered flags in the Pre-Final and Final.

Lewis had also won in the opening round of the campaign, thus securing enough points to come away with the champion’s trophy. “I am very happy to have clinched the X30 title in this year’s IAME Summer Series,” said the talented 16-year-old, who is a student at British School of Bahrain.

“It was a very challenging two rounds of the championship but I did my best and I am pleased with how everything turned out. “Securing the title was not all just me—I have to give a huge thanks to my family for all the support and encouragement they always give me in my ambitions to become a professional racer one day.

“I also thank my sponsors JBT, without whom none of this is possible, and a big thanks as well to my coach Rashid and mechanic Ahmed who were really instrumental in getting me and my kart prepared in the series’ two rounds.

“I cannot wait to get back into my race suit very soon and go racing once again.” Lewis got his weekend off to a flying start as he took pole position for the Pre-Final with a fastest lap of 47.775 seconds in Qualifying Practice. He was 0.013 seconds ahead of Rafael Jesus, who became his chief competitor in the meeting.

In the Pre-Final, Lewis cruised to a pole-to-flag victory and completed the 16-lap session in 12 minutes 46.071 seconds. He was unchallenged at the front and built a comfortable gap of 7.529s ahead of Rafael, while Saqir Al Qassemi came third a distant 11.353s behind.

The stage was now set for a thrilling Final, and Lewis was in prime position to come away with the win. Rafael hoped to give him a tough fight to the finish, and the pair were engaged in a two[1]horse race over the first few laps, with Lewis giving up his lead on lap two but regaining it for good on lap seven. Lewis was then unwavering as he made his push for the chequered flag.

He won in a total time of 15:09.504 over an exciting 19 laps—3.424s ahead of Rafael. To add to his triumph, Lewis also posted the Final’s fastest lap of 47.334s on lap 11 at a best speed of 77.957kph. With the result, Lewis cemented his position as one of Bahrain’s top young karters, who has been honing his skills in the Kingdom over recent years.

JBT Corporation is a leading global technology solutions provider to high-value segments of the food processing and air transportation industries. The U.S.-based company designs, manufactures, tests and services technologically sophisticated systems and products for their customers.

Lego to invest over $1 billion in US brick plant