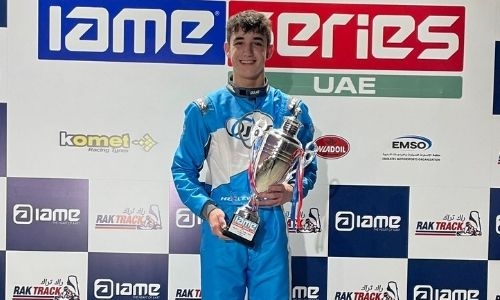 Bahrain-based karting sensation Lewis Smith stormed to a fantastic victory in the X30 Senior category of round one in the IAME Summer Series 2022 karting championship, held over the weekend at RAK Track in Ras Al Khaimah, the UAE. Smith, supported by aviation industry giants JBT AeroTech Corporation, won the meeting’s Final from pole after also taking the Pre-Final amidst some tough competition. It was an impressive result for the 16-year-old Briton, who is one of the leading karting talents being brought up in the Kingdom of Bahrain.

Lewis will now be looking to complete a double for the IAME Summer Series 2022, which will earn him the X30 Senior title, when he returns to RAK circuit for round two next month. Following his fine victory, Lewis commented: “I’m really happy to have won today in such a highly competitive championship, with so many great racers from all over the world. “It was a challenging weekend of racing throughout and I was pushed until the very end, but I held my resolve and was able to take the chequered flag.

“I’m really thankful to my sponsors JBT AeroTech Corporation, my family, my manager and my friends for all the support they give me as I continue to grow in my racing career. “I look forward to coming back here to the RAK Track for the second round of the IAME Summer Series and hopefully repeating this success.”

Despite the hot afternoon temperatures and challenging track conditions, Lewis was able to excel from the very beginning of the meeting. He started off the day taking second on the Qualifying Practice classification with a fastest lap of 42.430 seconds around the 0.928-kilometre RAK Track. He was just 0.152 seconds off the leaders’ pace.

In the 19-lap Pre-Final, however, Lewis took charge and ended the session in first place with a winning time of 13 minutes 33.479 seconds. He finished 0.299s ahead of Rafael Jesus and was 3.043s in front of third-placer Matteo Quintarelli. Lewis then rode his momentum to the final, where he displayed his limitless potential over 21 laps and took the victory in 15:01.663, enjoying a comfortable 5.310s gap from runner-up Quintarelli. Jesus finished third 8.043s adrift. Following the action, Lewis and the rest of the podium-placers in the X30 Senior, X30 Junior, X30 Mini and Gearbox categories received their respective trophies in podium ceremonies.

Lewis’s father Tony Smith expressed his delight with the victory. He said: “We are extremely overwhelmed by this achievement, especially with the support of JBT AeroTech Corporation to take us forward into the second round in June.

“Lewis is extremely excited and he is really looking forward to hopefully becoming the IAME Summer Series champion overall.” Lewis, who is currently managed by Bahraini racer Rashid Almuammari, has been competing internationally over the past three years within the GCC and Europe. He has already completed the 2019 to 2022 seasons of the Bahrain Rotax MAX Mojo Challenge in Bahrain, and has successfully finished on the podium each year in the series, winning his category title twice in 2019 and 2020. The second round of the IAME Summer Series 2022 is scheduled for June 12 at RAK Track.