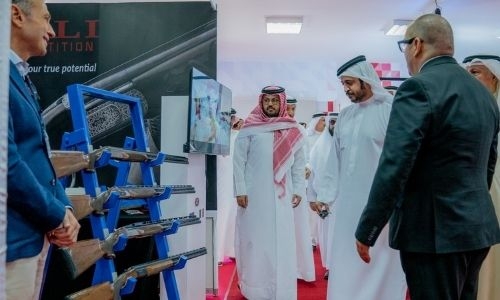 Under the patronage of HH Shaikh Khalid bin Hamad Al Khalifa, First Deputy President of the Supreme Council for Youth and Sports, President of the General Sports Authority and President of Bahrain Olympic Committee, the 1st International Shooting and Hunting Exhibition was inaugurated on Sunday at the Bahrain Shooting Association premises in Al Raffa. Organised by the Diplomatic Protocol Communications company, the event is taking place under the supervision of the General Sports Authority in collaboration with Bahrain Shooting Association.

The event was attended by Their Highnesses and Shaikhs and several ambassadors to the Kingdom of Bahrain as well as invitees. On this occasion, HH Shaikh Khalid bin Hamad Al Khalifa said: “We express our great pride in the inauguration of the 1st International Shooting and Hunting Exhibition, which embodies the directives of HM King Hamad bin Isa Al Khalifa, the King of the Kingdom of Bahrain to promote the Bahraini sports.

The organisation of this exhibition reflects the support given by HRH Prince Salman bin Hamad Al Khalifa, Crown Prince and Prime Minister to the efforts exerted to develop the sports sector,” His Highness continued: “We also appreciate the efforts made by HH Shaikh Nasser bin Hamad Al Khalifa, Representative of HM the King for Humanitarian Works and Youth Affairs and President of the Supreme Council for Youth and Sports, in supporting various sports, through targeted initiatives and programmes that encourage young people to practice sports, and creating an ideal atmosphere for the athletes to flourish,”