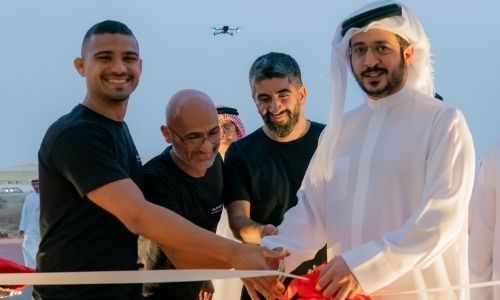 Present during the ribbon-cutting ceremony were HH Shaikh Salman bin Mohammed Al Khalifa, Vice President of the General Sports Authority and Dr Abdulrahman Sadiq Askar, CEO of the General Sports Authority. After inaugurating the property, HH Shaikh Khalid toured its facilities and was briefed on its components and the services it offers to sportspeople.

HH Shaikh Khalid stressed the importance of the local GYMs in achieving the objectives of sports and encouraging the public to follow a healthy lifestyle. Moreover, HH Shaikh Khalid affirmed the importance of allowing the local GYMs to increase their contributions and partnerships with various sports entities in order to elevate the level of sports in Bahrain in a way that enables accomplish further successes and achievements. Meanwhile, HH Shaikh Khalid praised the efforts and contributions of the owner of Elements GYM Ali Seena Munfaredi toward serving the sports movement in the Kingdom of Bahrain through the launch of the multi-use facility, especially combat sports.

“We are happy with the inauguration of Elements GYM which we hope will be a great addition to support sports in Bahrain. We also hail the contributions and efforts of Ali Seena Munfaredi, who has been a great sports model and managed to rise to great levels in the Jiu-Jitsu sport and achieve great successes for the Kingdom of Bahrain in various competitions and championships. We wish him the best of luck in his sports career,” HH Shaikh Khalid said.