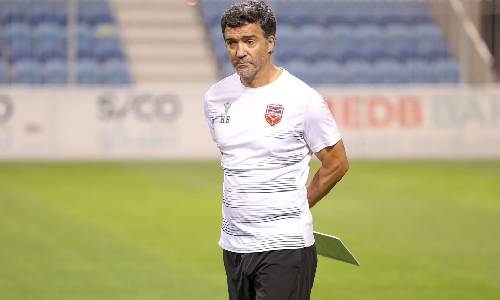 Bahrain’s senior men’s national football team kick off this evening their latest training gathering ahead of their AFC Asian Cup 2023 qualifiers next month.

The nationals are set to play in Group E of Asian Cup qualification alongside Turkmenistan, Bangladesh and Malaysia in Kuala Lumpur. The games will be played over a single round on three matchdays, including on June 8 against Bangladesh, on June 11 against Malaysia, and on June 14 against Turkmenistan.

The Bahrainis will be holding an overseas training camp as part of their final lead-up to the qualifiers in Bangkok. Following a few days of training locally, they are scheduled to fly to the Thai capital in the evening of May 17.

Bahrain’s training camp in Thailand is scheduled to continue until May 31. During their stay, they will be playing a training game on May 24, in addition to an international friendly against their Thai counterparts on the 31st.

Bahrain head coach Helio Sousa has named a 23-member senior men’s national football team for their upcoming overseas camp. The team currently does not include any top names from national champions Riffa and top side East Riffa, as they will be busy with their clubs competing in the group stages of this year’s AFC Cup competition.

Pandemic gets tougher to track as COVID testing plunges