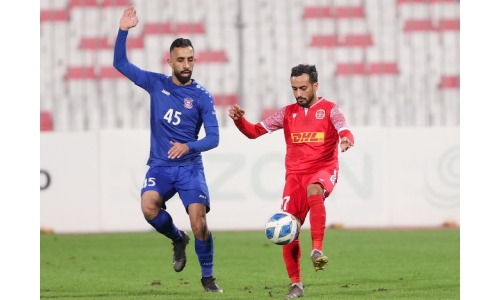 Manama returned to the top of the table in the 2021/2022 Nasser bin Hamad Bahrain Premier Football League last night following a resounding 3-0 victory over AFC Cup champions Muharraq at the National Stadium in Riffa.

Mohamed Yahya Al Hallak fired in a brace in a three-goal first half while also supplying the assist for teammate Mahdi Abduljabbar who scored their third. The match was part of the first day of the league’s eighth week of action.

Manama’s win was their fifth of the season as they improved to 18 points, leapfrogging former leaders and defending back-to-back champions Riffa to the top spot. Riffa, however, has a game in hand and are in action tomorrow. For Muharraq, it was their third loss in seven games as they stayed on eight markers.

Al Hallak opened Manama’s account with a brilliant solo effort in the 33rd minute. He rounded Muharraq’s Noor Aldeen Al Rawabdeh in the box and then fired in with a low effort from an acute angle. Ten minutes later, Manama made it two. Muharraq failed to clear Abduljabbar’s lob pass to Al Hallak into the box, with Amine Binedi mistiming his kick.

Al Hallak took full advantage in his one-on-one with Muharraq goalkeeper Sayed Mohammed Jaafar, and sent the ball home from close range. Then in the third minute of first-half stoppage time, Abduljabbar gave Manama the 3-0 lead, with Al Hallak this time providing the assist.

His precision cross from the edge of the area found an unmarked Abduljabbar, who needed only to tap the ball home in the face of goal. In yesterday’s other match at the same venue, Hidd and Al Ahli played to a goalless draw.