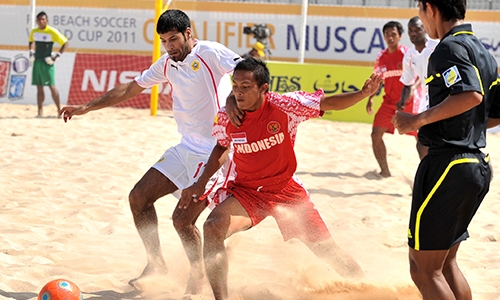 This was announced yesterday by the Bahrain Football Association (BFA), who have already submitted an official request to football’s international governing body FIFA.

Bahrain is one of five countries hoping to win the rights to stage the event.

The others are Colombia, the UAE, Seychelles and Thailand.

Shaikh Ali said that the Kingdom has already achieved great success in hosting international football competitions in the past, and that he has great confidence in the capabilities of the country and its people in hosting another major event for the first time.

Shaikh Ali noted that the BFA will spare no effort in its bid for the 2023 FIFA Beach Soccer World Cup at the organisational, administrative, technical, marketing and media levels.

The FIFA Beach Soccer World Cup is currently being held every two years.

This year, it took place in August in Moscow, with 16 nations taking part. Bahrain have appeared just twice in the competition, first in 2006 and then again in 2009.

The Bahrainis reached the quarter-finals in their debut appearance, but then did not make it through in their return to the competition three years later.